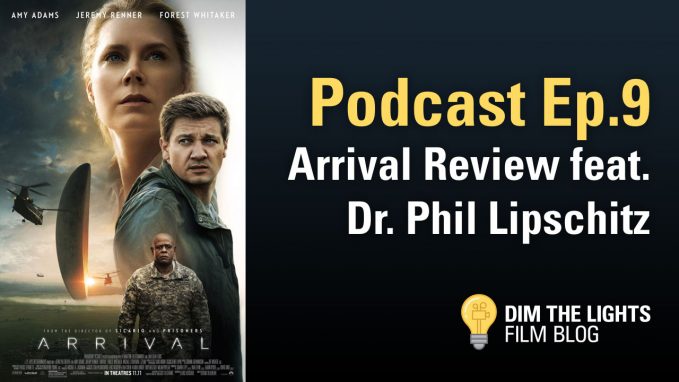 On this brand new episode of the Dim The Lights Podcast, Olga and I talk about this riveting sci-fi film with our own renowned linguist, Dr. Phil Lipschitz. Dr. Phil shares his thoughts on the film, how accurate the film’s science is, and how earthworms secretly talk in farts. Listen to our Arrival review.

Synopsis: Linguistics professor Louise Banks (Amy Adams) leads an elite team of investigators when gigantic spaceships touch down in 12 locations around the world. As nations teeter on the verge of global war, Banks and her crew must race against time to find a way to communicate with the extraterrestrial visitors. Hoping to unravel the mystery, she takes a chance that could threaten her life and quite possibly all of mankind.

Also on this episode, we talk about the Spiderman: Homecoming trailer, Justice League trailer, and Joss Whedon potentially directing a Batgirl film.

At The Box Office

Movies out this weekend include Ghost In The Shell, Boss Baby, and The Zookeeper’s Wife.

1. Ghost In The Shell

In a future in which humanity and technology have begun to merge, a cybernetically enhanced policewoman (Scarlett Johansson) hunts a mysterious terrorist who can hack into his victims’ minds and control their thoughts and memories. Her pursuit eventually leads her to discover the full truth about her traumatic past. Pilou Asbaek, Takeshi Kitano, Juliette Binoche, and Michael Pitt co-star. Directed by Rupert Sanders (Snow White and the Huntsman), Ghost in the Shell is based on a popular Japanese manga series, which was already adapted into an iconic anime film of the same name.

A seven-year-old boy (voice of Miles Christopher Bakshi) has his life turned upside down by his new brother, an infant known as the Boss Baby (Alec Baldwin) who wears a suit and has the brusque manner of a businessman. However, the two are forced to get past their initial antagonism when they must work together on a mission of espionage involving the rivalry between babies and puppies. Steve Buscemi, Lisa Kudrow, Jimmy Kimmel, and Tobey Maguire also lend their voices to this animated comedy, which is based on a picture book by Marla Frazee.

A husband (Johan Heldenbergh) and wife (Jessica Chastain) in Nazi-occupied Poland use their positions as caretakers at the Warsaw Zoo to shepherd Jews out of the country. Based on the non-fiction book of the same name by Diane Ackerman, The Zookeeper’s Wife was directed by Niki Caro (Whale Rider).

If you enjoyed this episode, please feel free to leave us a review on iTunes. It helps much more than you realize.

We are also looking to start a mailbag so that we can answer your questions and are even open to topic suggestions. You can reach Olga and me at info@dimthelightsfilmblog.com