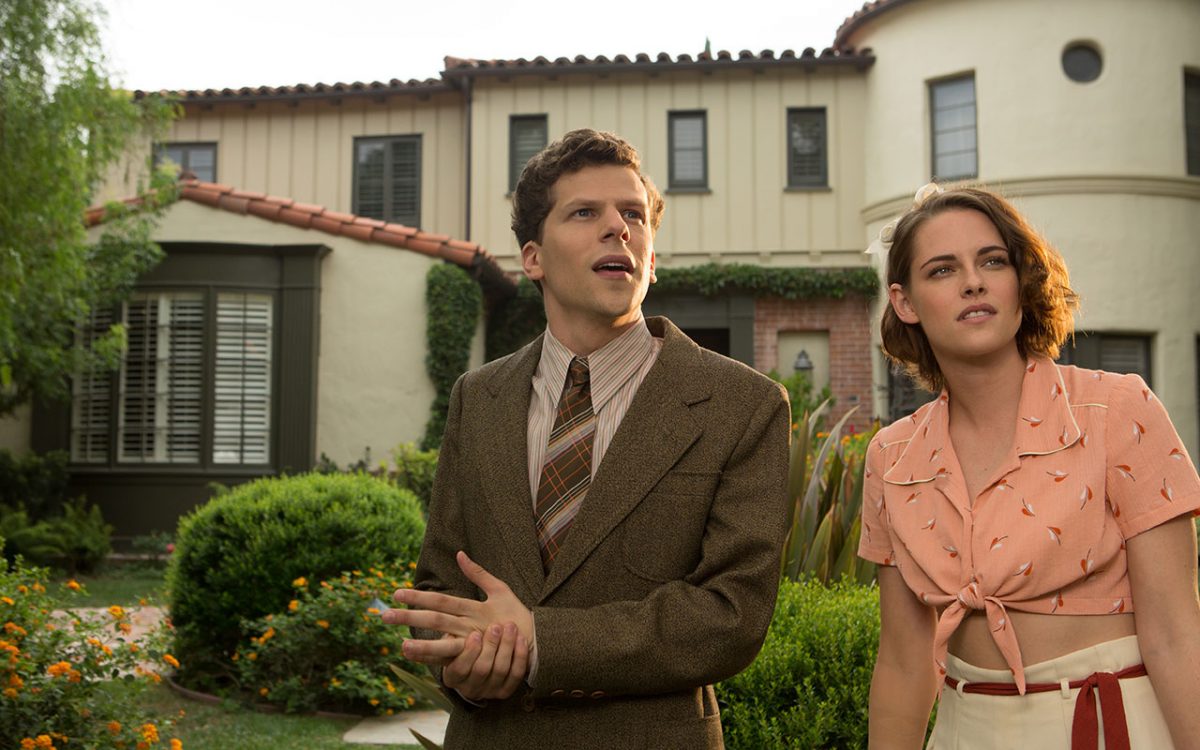 All in all, Café Society is a really nice film to watch, if you’re in the mood for period dramas. I’m sure Woody Allen fans are curious to see what this film is like, and compare it to his past works.

Woody Allen is Back

From director Woody Allen comes Café Society. Café Society is a period film about the 1930s that seeks to show the glamour of Hollywood, the enticement of the film industry, and the gangster lifestyle that coexisted in that time as well.

Woody Allen portrays this period through the life of Bobby Dorfman (Jesse Eisenberg), a Bronx native who wishes to relocate to Hollywood after realizing he didn’t like working for his father, and instead wishes to pursue a career within the film industry. His sister, Evelyn (Sari Lennick), reaches out to Phil, Bobby’s uncle, who is a big name in Hollywood and gets him to offer work to Bobby. While running errands for Phil, Bobby gets exposure in the film industry and those who work in it. Bobby eventually meets Veronica (Kristen Stewart), Phil’s secretary. She’s tasked with showing him around Hollywood, and as Bobby hangs out with her more, he falls in love with her.

I haven’t seen too many Woody Allen films, so I can’t really compare this film to his previous films. Having said that, I enjoyed this film, but I will say it takes a certain mood to be able to sit through and watch Café Society. If you’re not in the mood for a period drama, with average pacing, then you may want to wait another time to watch it.

That aside, Café Society is an enjoyable drama that chooses to engage its audience through its 1930s setting, in both Hollywood and New York. Director Woody Allen definitely makes it clear that Café Society is looking to pay homage to this time period. Through our main character, Bobby, we get to see what it’s like having to climb the Hollywood ladder and make it big. Trying to make it in the film industry was a really big notion back in this time period. If not the film industry, then organized crime was the other big notion that defined the 1930s. We see more of that side through Bobby’s brother, Ben (Corey Stoll), whose activities definitely border along that side of the law. However, Ben doesn’t have as huge a roll as Bobby does, so we only see certain things that go on in his life. It’s still enough for the you to grasp that Ben is in organized crime though.

It was enjoyable seeing the talent presented in this film. Jesse Eisenberg performs his role well and it was definitely enjoyable to see Steve Carrell as Phil. I think it’s safe to say it’s usually enjoyable to see Steve Carrell grace the screen whether it’s on the big or small screen. Kristen Stewart did really well too in her role as Vonnie. I’m not a huge Kristen Stewart fan, but I have to say I really enjoyed seeing her act in this film. She owned her role and performed with at an excellent caliber.

If I take anything away from this film, it would be Kristen Stewart’s acting. I’m not used to seeing her in films such as this, but dramas like this one is where she shines the most. It seems she’s starting to appear in such films more often, and I hope she continues to take on films like these. It’s where she does her best work.

As mentioned before, Corey Stoll has a part in this story and he did pretty well in his role as the gangster of the family while Bobby was the one looking to take on a more legitimate profession. Blake Lively has a role in this film as well, but I won’t say too much, as that would go into spoiler territory. I will say it’s really nice to see her in this film, and while she doesn’t have a huge role, she performs well and adds to the story.

A Mellow Drama Over a Big Blockbuster

All in all, Café Society is a really nice film to watch, if you’re in the mood for period dramas. I’m sure Woody Allen fans are curious to see what this film is like, and compare it to his past works. If you get a chance definitely try to check this film out. It’s a nice break from watching huge blockbuster spectacles, if you need a break from high octane films. Go check out Café Society and see how you like it.