From director Denis Villeneuve (Incendies, Prisoners) comes a new and exciting thriller, Sicario. Kate Macer (Emily Blunt), an FBI agent part of the Special Weapons and Tactics Team, is enlisted to help a government task force with a new assignment. This mission, whose true purpose is heavily guarded, comes on the heels of a gruesome slaughter discovered by Kate and her team. Determined to prove her worth and be useful to her new mysterious team,  Kate travels down the “rabbit hole” and soon realizes this mission is far more dangerous than she first anticipated. Joining this foray are Matt Graver (Josh Brolin) and Alejandro Gillick (Benicio Del Toro), both of who head up the new task force. 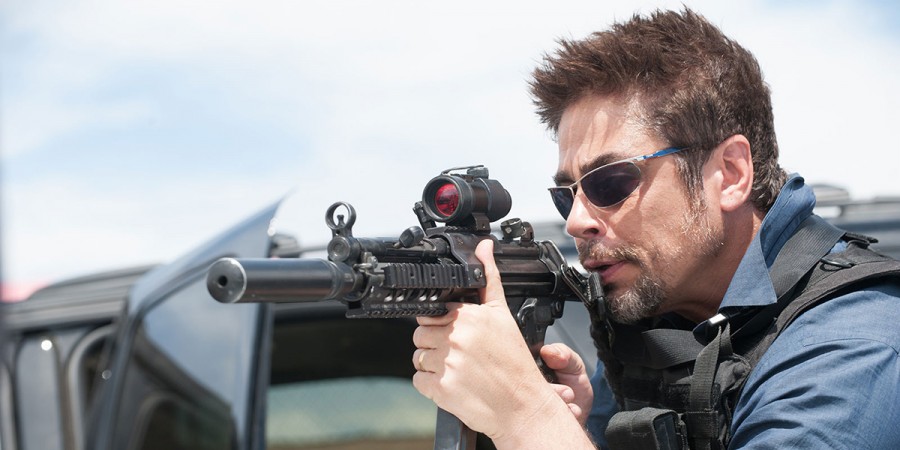 Sicario successfully fuels the mind’s curiosity throughout the entire film in a way most films can’t manage in a few minutes. The air is thick with tension and Jóhann Jóhannsson‘s score grips you by the throat.  Similar to films like Jaws and Godzilla (2014), Sicario director Denis Villeneuve masterfully builds suspense. Every moment you feel the imminent release of tension, Villeneuve pulls the curtain close to leave you hanging in pressurized state of limbo. The film sets the tone almost immediately with a very graphic opening, but plays down the action deceptively. It isn’t like the typical thriller that telegraphs each and every moment. Sicario’s grounded tone creates a realism that is almost too real. The result is you seated a few rows ahead in someones lap. The writing for this movie is paced well and is almost as enticing as Hansel and Gretel’s infamous breadcrumbs. I eagerly followed Kate through what is possibly one of the most gripping films of the year.

Sicario complements it’s engrossing story with beautiful scenery and well choreographed action scenes that will leave an impression on you. This movie utilizes a mixture of aerial and landscape shots to show off the dry suburbs of Phoenix, Arizona and the rotting city of Juarez, Mexico. The aerial views the movie offers can be best compared to the aerial shots of scenery you see in True Detective on HBO. The cinematography here is emphasized through illustrative imagery that is bound to leave an impression. The style of cinematography helps the film stand out from thrillers with similar plots.

Sicario was marketed as a action-packed thriller, but do not be fooled. This isn’t another Michael Bay-esque film with little substance and crazy set pieces. Sicario boasts qualitative action sequences that are subtler in its execution. The thrills are realistic, gritty, and serve as part of the narrative as opposed to being just because they can. The realism drops you into the middle of the shootouts with real consequences. Our heroes are not invincible. They get injured and experience a real sense of distress. In one scene, Kate curses and loses her cool after she is nearly shot by an Mexican gangster. Another sequence takes place in a pitch black desert that accurately portrays the scenery. Kate and her squad are forced to use night vision goggles which we are again roped into, adding to the tension and realism. Sicario successfully presents the story in riveting fashion. 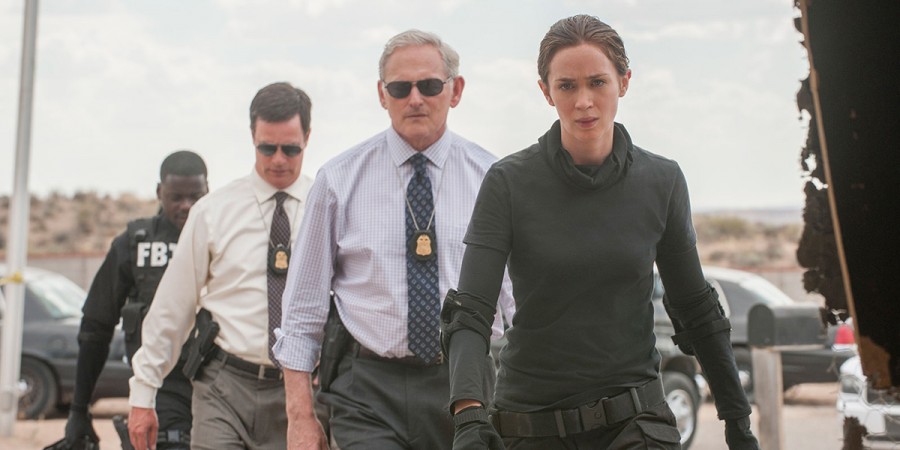 Along with top-notch cinematography and an strong plot, Sicario also boasts A-list acting talent. Emily Blunt gives us one of her most powerful performances. The emotional toll her character endures is evident in every tremor and furrowed brow. She is in danger, and there is not one second where that belief is suspended. She stands strong in a male dominated profession and cast. Josh Brolin’s Matt Graver, plays the “DoD consultant” shrouded in mystery. Although Brolin’s character is mostly a mystery to Kate, he serves as some of the film’s much needed comedy relief. Graver’s partner, Benicio Del Toro’s Alejandro Gillick, is not as light-hearted. Gillick’s face bleeds of a life filled with pain and remorse. He is an efficient marksman and appears to have plenty of experience with the Mexican drug cartels. Aside from that Matt and Alejandro are a mystery. Kate’s frustration at the lack of information that is shared plays out in the film and adds to the tension. If you’re brought on to a task force for your knowledge in field operations and later find out they have all the firepower and knowledge they need, then you too will feel like you’re being lied to. It’s best to say in a situation like this, know when you’re dealing with wolves. You’ll understand that reference when you see this movie.

Sneaking In Some Politics

One last thing to add is that this movie is somewhat politically motivated and addresses the situation of the ongoing war on drugs between the U.S. and Mexico. It’s not something heavy that’s laid on the audience though; at least it didn’t seem that way. Sicario really seeks to just raise questions about this political issue without offering any real solutions. That being said intertwining a modern theme with all the other elements in this movie makes Sicario a really enjoyable film. If you’re hoping for something upbeat, you might want to pass on Sicario. If you are like me and actually enjoy grim stories, go see Sicario. I hope it impresses you as much as it impressed me.

Sicario is a deceptively gripping story following the mysterious investigation of Mexican drug cartels through the eyes of Emily Blunt's Kate Macer. The film excels with outstanding performances, a gripping score, and highly realistic action. Definitely one of the most entertaining and dark films of the year.