Gone Girl is the engrossing story of a perfect marriage in peril. Nick Dunne (Ben Affleck), a struggling journalist, discovers the disappearance of his wife, Amy (Rosamund Pike), on the day of their fifth anniversary. Beside a shattered coffee table, and scattered picture frames, Nick immediately calls the police, and after a quick sweep of the house, they speed to the station. Although Nick’s wife had just been abducted, Nick is strangely calm about the entire situation. The police ask the usual questions, but soon realize this is no ordinary abduction. Nick is then placed in the spotlight and held in question by the police, the media, and even his own family. Amidst the chaos, Nick discovers a series of scavenger hunt letters meant to be part of Amy’s anniversary gift to him. With it, Nick must protect the image of his perfect marriage and discover who is responsible for the kidnapping of his wife.

First off, director David Fincher is the mastermind behind this film. He has directed many impressive films like The Social Network and The Girl With A Dragon Tatoo. Both films were absolutely engrossing. One thing to know about Fincher is his ability to create a compelling story that twists when you least expect it. Also spectacular, was the novel Gone Girl, by Gillian Flynn, which I had recently picked up prior to the film’s announcement. When I heard that the brilliant novel would be adapted by David Fincher, it was an obvious must-see. Gillian Flynn not only wrote the novel, but lent her expertise to pen the screenplay for the film. Most of the time, film adaptations are written by other individuals. This is what solidified my desire to see this film. If anyone could translate the novel into film, it would be the novelist herself. 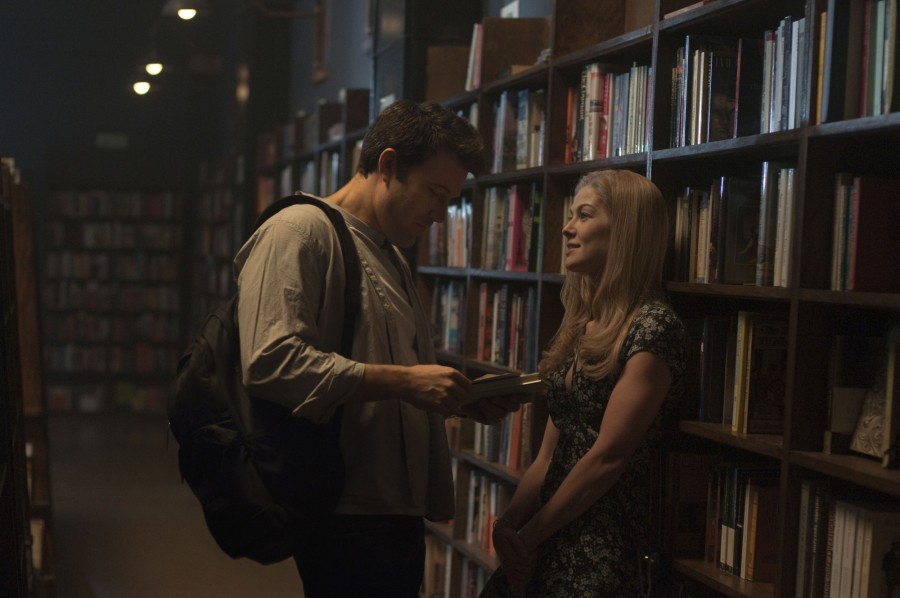 Gone Girl is one of the most intoxicating films I have ever seen. The tone is deceptively calm and subdued but do not be fooled. What at first seems like a typical missing persons case becomes truly disturbing. As the film progresses, the nature of the relationships between characters elevates in intensely mortifying ways. Just when you think it is over, Gone Girl proves yet again how absolutely twisted it is. The story-telling is crafted so beautifully that all the sick discoveries only raise the desire to continue pressing on.

The last film I saw featuring Ben Affleck was Argo, which he performed fantastically. Ben perfectly depicts the deceptive nature of his character. He is calm and collected, but has an inner darkness. As great as Affleck was, the one who stole the show is the missing individual, played by Rosamund Pike. Through the use of diary entries and flashbacks, Amy reveals the nature of her marriage with Nick. Rosamund Pike’s character is intoxicating. Every moment she is on screen you only want more. The character arc of both these phenomenal anti-heroes is fascinating.

Equally as fascinating is the ambiance created by the film. The score by Atticus Ross is mesmerizing. The music isn’t overdone, or eccentric. The subtlety in each note juxtaposes the grandeur of each plot twist. The setting also ties into the almost nonchalant nature of the film. The Dunnes live in an ordinary, quiet community in Carthage, Missouri. The events that occur are in complete contrast to this society. 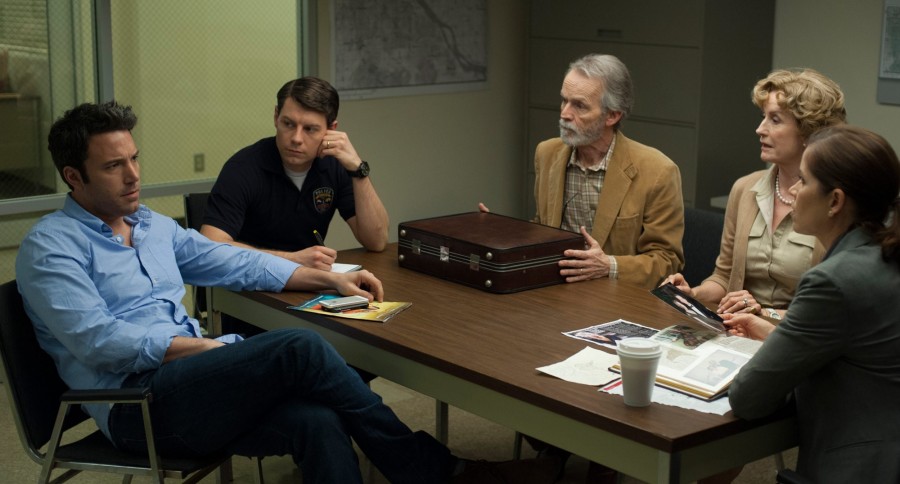 Nick Dunne grimaces at the implications of his involvement in the disappearance of his wife, Amy.

What truly sets this film apart is the social commentary Fincher adds to this engrossing film. Everyone can relate to this film concerning the state of marriages. Not every marriage is perfect, even if it appears so on the surface. Often times, there are secrets between spouses and problems that go by unresolved. Although the result is exaggerated in Gone Girl, the truth of the matter is that marriages are failing and the statistics prove it. Also clever is the media’s role in persuading the public’s opinion of Nick Dunne. It is underestimated how powerful the media is. They are able to twist facts, act as judge and jury. It is truly sickening the lies that are fed daily to the public about the events around them. Gone Girl’s unfiltered content shows through cleverly as it reveals the ugly truth about two important aspects of American life.

Gone Girl may potentially be one of the most engaging and successful films of the year. Once the plot unfolds, you won’t leave the edge of your seat! I know this review is incredibly late, but if you still haven’t seen it, go now!

Gone Girl is the engrossing story of a perfect marriage in peril. Nick Dunne (Ben Affleck), a struggling journalist, discovers the disappearance of his wife, Amy (Rosamund Pike), on the day of their fifth anniversary. Beside a shattered coffee table, and scattered picture frames, Nick immediately calls the police, and after&hellip;
Gone Girl Review
Gone Girl Review
Brian Maya

Gone Girl may potentially be one of the most engaging and successful films of the year. Once the plot unfolds, you won’t leave the edge of your seat! I know this review is incredibly late, but if you still haven’t seen it, go now!