Home » Reviews » Inside Out Gets It Right Side Up (Mostly)

Pixar At It Again

From the studio that brought you movies like Toy Story, Monsters, Inc., and The Incredibles comes another great film, and one that I might add is not only enjoyable, but informative both for kids and adults. Inside Out is the story about the little “voices” in your head. Our characters in this movie are the emotions we feel. We have Joy, Sadness, Fear, Disgust, and Anger. Together they all navigate life in the head of 11-year-old Riley and learn important life lessons when Riley’s life is shaken up due to a relocation of her family from Minnesota to San Francisco. Starring in this movie are Amy Poehler (Parks and Recreation), Phyllis Smith (The Office), Bill Hader (Saturday Night Live), Mindy Kaling (The Office, The Mindy Project), and Lewis Black (American comedian, Accepted). 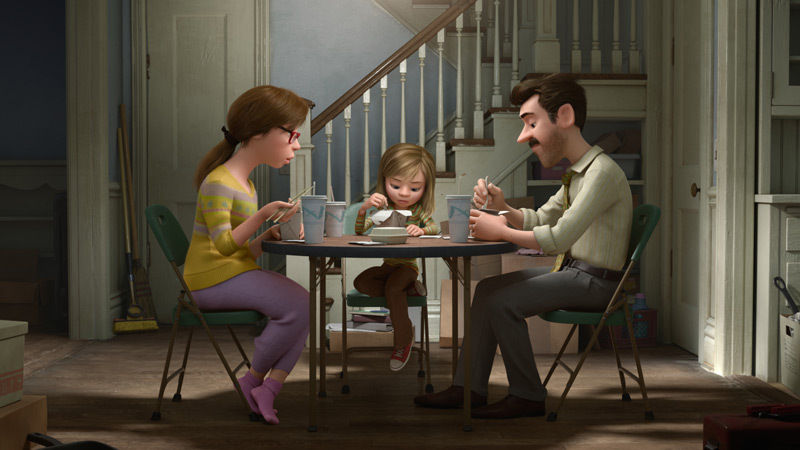 Not every moment in life is filled with joy.

Inside Out is a movie more enjoyable than I thought it would be. It excels as a kids film in that it not only is designed with the intention of being a family friendly movie, but also being one that helps kids to understand something important about themselves through an understandable and concise plot. This movie centers around the emotional turmoil that takes place inside Riley’s head when she relocates to a new town. Moving is stressful for anyone no matter what age you’re at. For an 11-year-old, however, moving translates to getting used to a new school, having to make new friends, and finding new ways to keep up with your hobbies and interests. Dealing with all of that is a very large amount of change for someone young to experience. Through the emotions in Riley’s head we see her slowly trying to acclimate to the new environment she’s in, but as the movie goes on it’s more than apparent that it’s very difficult for Riley to see where she is as her new home. From here we are taken on a journey that tells us, the audience, that the feelings and emotions we have are important and definitely teaches kids that it’s okay to not always experience joy or happiness in times of hardship.

In showing us how Riley is on an emotional level we have our characters, or “emotions”, as the stars of this film! We have Joy, who is the head of this team of emotions and works to make sure Riley is in a good mood whenever she can be. She sees Riley being happy and joyful as a means for her to be emotionally healthy. Sadness is the emotion that comes to the forefront when Riley deals with situations involving her being well, sad, about something. While Sadness and Joy get along, Sadness unintentionally butts heads with Joy when Riley feels down and as a result sabotages Joy’s plans to keep Riley upbeat and happy. Joy doesn’t exactly like it when that happens because if Riley is sad, then that will only lead to her spiraling emotionally downhill further and that, in Joy’s head, equals to Riley not doing well. Another member of the team is Fear. He helps to keep Riley safe. Fear is the one who will analyze any and every kind of dangerous or potentially dangerous situations that can harm Riley physically or emotionally, even if they are extremely farfetched. (Hey, it’s important to know that quicksand or spontaneous combustion can creep up on you at any moment! So be prepared!) Next we have Anger. He is the one who takes control when Riley is in situations that call for heated anguish, such as…not being allowed to have dessert after dinner. (Oh…that is definitely not okay). Last up is Disgust. She takes charge when Riley is presented with something that may not be acceptable on a social level. One example of such a situation is when the only kind of pizza available to eat is broccoli pizza. (Broccoli pizza? I don’t think that’s how pizza is meant to be eaten. According to Anger it would seem San Francisco ruined pizza.) Disgust also helps to play a role in helping Riley to hang out with the “right” kids in school, and by that Disgust means the “cool” kids. That may be up for debate. 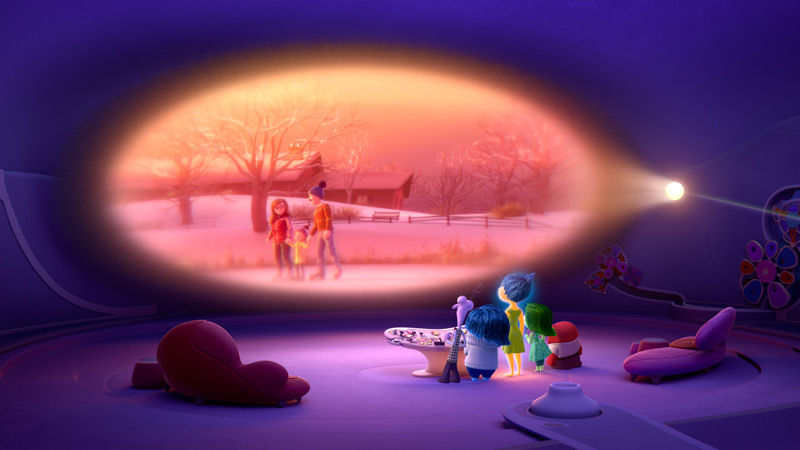 The Emotions from Inside Out see a touching moment in Riley’s life.

With this cast of characters and a well written story, Inside Out not only excels as a movie, but also excels for the genre it encompasses. While kids movies have really nice work and effort done on the animations and the cinematography, not all kids movies, sadly, have the most coherent plot. Seeing the work and effort put into not only the cinematography, but the story as well makes the film so much more rich and enjoyable for you. With a great movie made there’s one last thing that can be touched on that might give some extra insight into this movie. As you already know, Inside Out is a movie about the workings of the mind. You should know that while the movie does a pretty good job of illustrating the mind as accurate as a movie can do there are things that won’t be completely accurate. For example, the human mind is capable of expressing much more than just five emotions. However, due to the fact that a movie can only center around a certain number of characters there are only five emotions that are focused upon. Also the way the mind is painted is much more complex than the illustration given by Inside Out, but again for story purposes a simpler illustration is given. The illustration presented, however, is one that is mostly accurate and easy enough for kids and adults to understand. For only focusing on just those emotions and concepts presented, Inside Out does a pretty good job of trying to encompass the complexities of the mind without making it too complicated.

Inside Out is a film that goes above and beyond as a film and a kids film. If you have kids and you’re looking for a movie for the whole family to see, then Inside Out is definitely a movie you should watch. Go see it and see what you (and your emotions) have to say about the film! I sincerely hope the “Joy” in you is as happy with this movie as the “Joy” in me was or at least surprised if you feel skeptical about the movie for whatever reason(s) you may have.

Inside Out is a film that goes above and beyond as a film and a kids film. If you have kids and you’re looking for a movie for the whole family to see, then Inside Out is definitely a movie you should watch. Go see it and see what you (and your emotions) have to say about the film! I sincerely hope the “Joy” in you is as happy with this movie as the “Joy” in me was or at least surprised if you feel skeptical about the movie for whatever reason(s) you may have.