The original Mad Max film was released in 1979. I wasn’t even a thought that year. I didn’t have the privilege of relishing in one of cinema’s most influential movies. The beginnings of Mel Gibson’s successful and lengthy career started here. So did the first of a gritty trilogy of post-apocalyptic desert epics. Now, 36 years later the original creator, George Miller, returns blessing us lovers of carnage and destruction  with another game-changer. Mad Max: Fury Road is a non-stop adrenaline-spiking thrill ride that relentlessly anchors you to the edge of your squeaky local theatre seat. It has been a while since I have been this awestruck by a film, and boy does George Miller deliver a masterpiece.

As the name implies, Mad Max: Fury Road takes us on a heart-racing journey through a shattered world unrecognizable to our own. The landscape is a contrast of rich golden sand and bright blue skies. This desert is void of the abundant resources we ungratefully enjoy today. In the world of the mad, gas and water are priceless commodities. Bane-impersonator, Immortan Joe (Hugh Keays-Byrne) controls all these valuables and has set himself up as dictator of a barely surviving people. Our first  glimpse at Max Rockatansky (Tom Hardy)  is atop a dusty hill outrunning a convoy of Immortan Joe’s War Boys. He fails and is taken captive as a blood bag for sickly War Boys. Meanwhile, Immortan Joe sends his most fearless warrior Imperator Furiosa on a simple convoy mission, only to realize she is smuggling his harem of 5 beautiful women. The race to retrieve Immortan Joe’s prized possessions takes everyone to the depths of the desert region. What ensues is the most bizarre, most entertaining, and most gripping  feature-length chase  I have ever laid eyes upon. 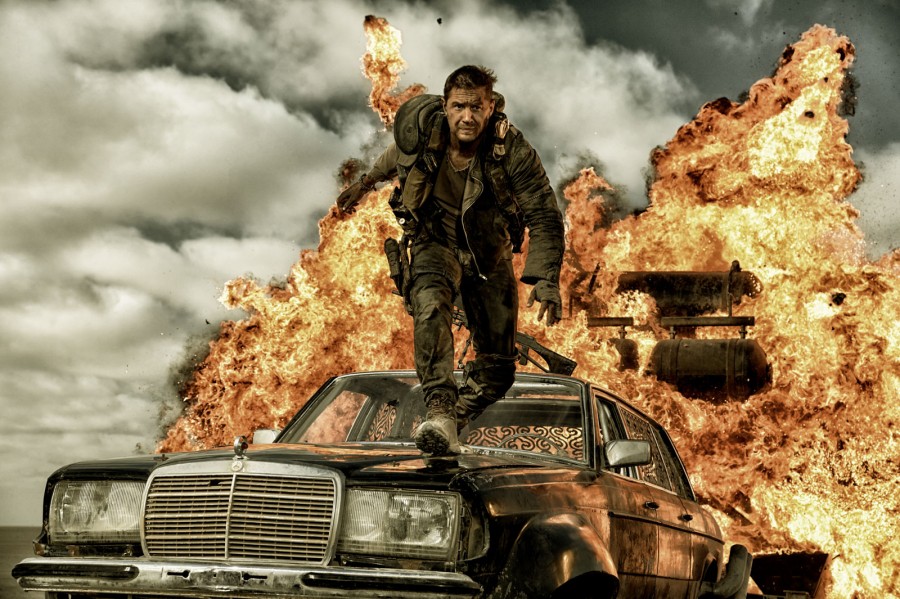 Max Rockatansky clings for his life as his captive’s vehicle overturns.

From start to finish Mad Max: Fury Road was filled with the roaring of fiery vehicles, the tribal-like booming of music, and the chanting of blood-thirsty warriors. One of Mad Max’s many strengths is its fast pace. George Miller never gives you a chance to come up for air in the fierce chase through his desolate wasteland. The cars were fast and the action was even faster. The combination of quick cuts and sped up film to intensify the movements of characters and vehicles. If you are a fan of action and thrills, George has you covered.

Not only did George Miller give us beautifully stylistic and fast-paced imagery, but he also did so without the aid of CGI. Miller used a minimal amount of computer graphics in order to accomplish the wide variety of stunts on display in Mad Max: Fury Road. That is quite an accomplishment when we have films like Michael Bay’s Transformers series that over use that technology and still fail to capture the awe of an audience. Miller masterfully uses practical techniques in order to carry out dangerous and complex stunts. Mind you this is a film with large explosions, and men swinging precariously from high-speed cars. Miller has even mentioned that Tom Hardy, who plays Max, is on camera throughout most of his stunt work. All these painstaking decisions add to the believability and intensity of the film.

If incredible action sequences weren’t enough, Miller utilizes beautifully captivating sound design. This is where, for me, the film transcends most in its genre. If it weren’t for the sound design, Mad Max: Fury Road may not have garnered the positive response that it did. You felt every booming plunge into the desert landscape. The music, courtesy of Junkie XL, was stunningly well-suited for this film. It was edgy and raw. The film even incorporated its thundering soundtrack to the story by adding a maniacal musician, riding on top of a truck with a three-neck guitar spewing fire, leading the charge against Max and Furiosa. 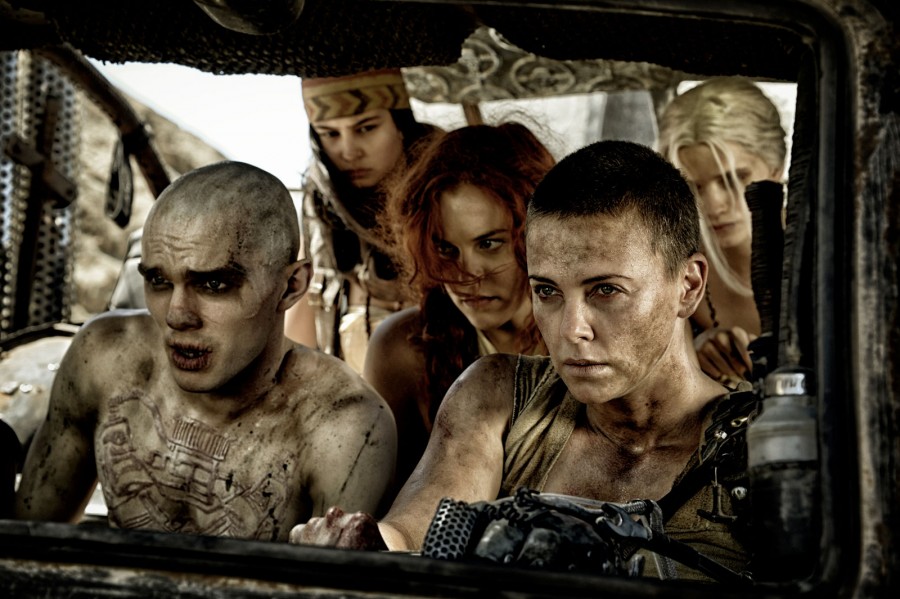 Charlize Theron and Nicolas Hoult drive the women of the wasteland to a safe haven.

Enough has not been said about the cast of Mad Max: Fury Road. The film is able to make you feel invested in these unique characters with such a small amount of dialogue. The main characters of Max, and Furiosa who share the most screen time do so with a variety of grunts, glances, and mutterings. I would have never imagined I would feel such sympathy for characters who barely utter a word. Tom Hardy (The Dark Knight Rises, Inception)  and Charlize Theron (Prometheus, The Italian Job) deserve all the credit. Speaking of Tom Hardy, he played an excellent Max Rockatanksy. His version of Max was a quietly intense man, haunted by the deaths of his most cherished loved ones and driven by the urge to survive. Tom Hardy is a magnificent actor able to play a diverse range of characters. This remains true in this film. The same can be said of this role. You can feel the intensity of his battle-hardened demeanor. He stands face to face with some of Immortan Joe’s most fierce warriors and yet finds sympathy for the young women escaping Immortan Joe’s lair. Last time I saw Tom Hardy was in the impressively dark film The Drop. Again, Tom displays his prowess as a versatile lead actor.

Oh, did I say lead actor? That’s right, Tom’ s character may be in the title card, but this film is all about the ladies (winky face). Don’t misunderstand me though. Charlize Theron is the main protagonist in this film, being the fearless Furiosa. Max is just along for the ride. Charlize invigorates the role of Furiosa with a substance and intensity seldomly seen in female roles which is sorely missing in Hollywood. Furiosa sports a robotic prosthetic arm and challenges Max several times. She, like Max, is fueled by one purpose: saving the young women held captive by Immortan Joe. Furiosa doesn’t say much, but when she helplessly kneels in the hot desert sand and cries out loud to the heavens, you really do feel for her plight in the desolate land of the mad.

The other standout performance goes to Nicholas Hoult (X-Men: First-Class, Warm Bodies), a sickly War Boy, Nux who dragged Max around as a blood bag. Nicholas Hoult is absolutely indistinguishable from his role as Beast in X-Men. His frail body is covered in crusty white paint and scars. His raspy voice echoes throughout a desert storm as he cries out, “What A Lovely Day!”. Nux, also deranged by the madness, lives to serve Immortan Joe and sacrifice his life for a seat in Valhalla. He is deeply motivated by this cause and will stop at nothing to seek out and capture the five wives of Immortan Joe. Nux served as an in-depth glimpse into the insanity of the world he inhabits. Seeing his unwavering resolve to fulfill his kamikaze mission for a honorable death is admirable. Nicholas Hoult brings a phenomenal performance to the role of Nux who ultimately becomes an unlikely hero throughout his journey in the wasteland.

Mad Max: Fury Road is the film that will shock everyone in 2015. As hyped as this movie was, with films like Avengers: Age of Ultron and Pitch Perfect 2 surrounding it in the box office, it was unlikely it would fare very well. However, this film has been well-received by a number of sources. I implore you to give this film a try. And if you are one who has seen the original trilogy, do yourself a favor and revisit the land of the mad, it is absolutely lovely.

What A Lovely Day

Mad Max: Fury Road is an adrenaline-spiking thrill ride that relentlessly anchors you to the edge of your squeaky local theatre seat.