Katniss is the One

The conclusion to the Hunger Games series comes to an end with The Hunger Games: Mockingjay Part 2. Having rescued Peeta (Josh Hutcherson) from the Capitol’s grip, Katniss (Jennifer Lawrence) now turns her focus back on the war between the districts and the Capitol. In her best efforts, she works with District 13 to unite all the districts together against the Capitol and President Snow (Donald Sutherland). One way or another, Katniss works to bring this war to an end in the hope that defeating President Snow will mean a new and better world for those who suffered under his regime.

A Bittersweet End With Darker Atmosphere

The Hunger Games films, even up to the very last one, has always been Katniss’s story. Despite her adventures having many characters, the focus has mostly been on her. I usually delve into all the characters that make up a film, but I will not for this review. There are too many characters to cover and not all of them have enough of a large role for me to spend time talking about. We will solely focus on Katniss as a character, since this is her story, and I’ll only mention other characters in relation to her story. 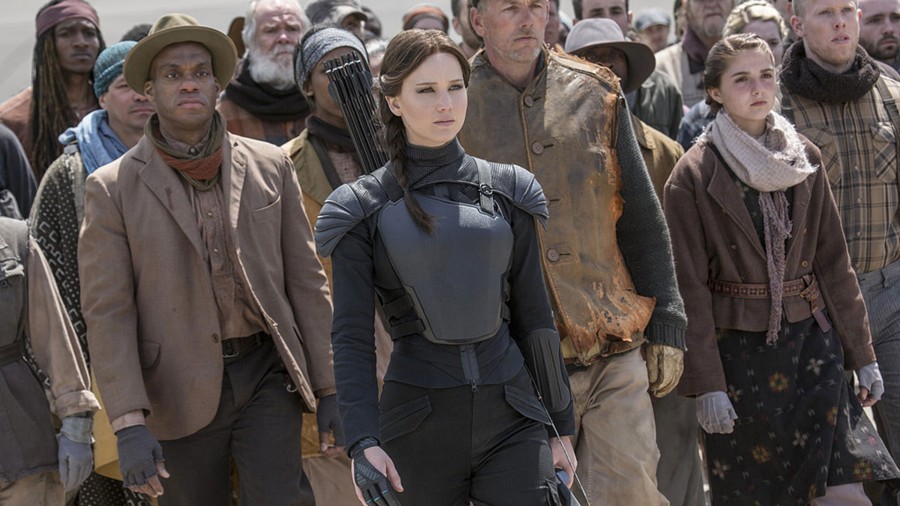 Following up on the first part, Mockingjay: Part 2 feels more engaging and is a paced better than that of Mockingjay: Part 1. The last film dragged on, and wasn’t as engaging as the first two films before it. Due to the difference in story and pacing, it needed some getting used to. We had to find a way to view the last two films as war films rather than a drama taking place in a dystopian world. While there was plenty of action, the first two films in this series had a “gladiator games” vibe compared to that of a war drama. That’s not necessarily a bad transition, but splitting the last novel into two parts most likely made that transition bumpy and made the first part of Mockingjay feel like there wasn’t much to work with. Whether it was really necessary to split Mockingjay into two parts is something I can’t really answer.

I’ve never read the novels and am reviewing this film independently from the narrative of its novel counterpart. But to get back on topic, Mockingjay: Part 2 is well written, and coherent from beginning to end. If watching this movie was like following a dotted line you would have no issue being able to follow it. You as an audience member can easily follow along with the plot and understand what’s going on. You can even follow the narrative elements that are not the main focus of the plot easily, such as the love triangle between Katniss, Peeta, and Gale (Liam Hemsworth). Usually love triangles aren’t written well, but this film does a really good job of weaving that narrative element into the existing plot presented. It’s impressive also that the tones mesh well. A love triangle compared to a war is something that one can consider petty and not as significant, but the writers did a decent job of showing the love triangle was an ongoing conflict Katniss experienced when thrown into the Hunger Games. The emotional tones of each character managed to mix well in the plot and make viewers care for both these problems that Katniss is going through. 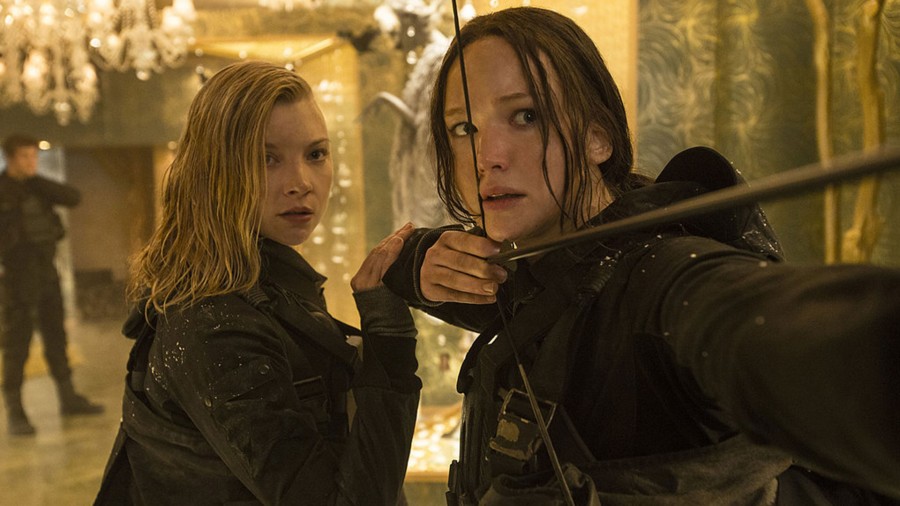 Another good, or at least interesting, aspect of this film is the tone and atmosphere presented. The plot in this film weaves together the war scenario presented in Mockingjay: Part 1 with the “Hunger Games” element in the first two films. The result is you have Katniss and her fellow companions and soldiers navigating a war zone like the way Katniss navigated the Hunger Games arenas. Every step they took in caution wasn’t necessarily because they were expecting opposition from Capitol peacekeepers, but because the areas they navigated were rigged with traps or “pods” designed to kill any rebels coming into the Capitol outskirts. The traps weren’t exactly standard weapons of war either. They were designed to kill people in gruesome and creative ways and is the kind of thing you expect to see as entertainment in a gladiator arena. In short, Katniss, along with company, made their way through a battlefield as if it were an arena where the Hunger Games were broadcasted. This film’s main narrative could easily be labeled informally, as Finnick would say, the “76th Hunger Games.”

The narrative tone feels darker than its predecessors. Once the Quarter Quell (75th Hunger Games) in Catching Fire ended in revolution, things got darker and more serious. Katniss now stood an even higher chance to lose the few good things she had in her life if the war ended in the favor of the Capitol and President Snow. While she’s appreciative of the chance to make a better world, she’s first and foremost more concerned about protecting her family and other loved ones. If she could find a way to get by in the current regime Panem had under the Capitol with those she cared about being safe, then that was enough. From the very beginning, all Katniss wanted to do was protect her sister, Primrose (Willow Shields). All that hangs in the balance with an actual war going on. War has casualties and suffering and even if things end well for those in need of the victory, it always comes at a cost. Katniss set out only to save her sister. She ended up needing to lead a revolution and actually change the world. By the time you reach the ending you may have mixed feelings about the situation in terms of what’s next for Katniss and the nation of Panem. There’s something good that happens, but it doesn’t come without its cost or trauma for the characters involved in this war.

The Hunger Games: Mockingjay Part 2 ends with a worthy conclusion to the Hunger Games series, but also carries with it a heavy weight because of the darker and more morbid tone. It’s enjoyable to watch, but doesn’t feel as engaging as the previous entries. That I guess is to be expected at times from films portraying dystopian worlds, especially if the consequences and stakes in the narrative are high. This film definitely was high in both those areas for our heroine, but at least with this film we get to see a conclusion to this war and Katniss’s journey of turmoil. If you’ve seen the previous entries you should definitely take the time to watch this film!

The Conclusion to Mockinjay Part 2

The Hunger Games: Mockingjay Part 2 ends with a worthy conclusion to the Hunger Games series, but also carries with it a heavy weight because of the darker and more morbid tone. It’s enjoyable to watch, but doesn’t feel as engaging as the previous entries.