The Cast Of Paper Towns

Paper Towns, a film I’ve been looking forward to seeing, is a mystery comedy-drama based on the book of the same name by John Green, who is the author of “The Fault in Our Stars.” Paper Towns revolves around Quentin “Q” Jacobsen (Nat Wolff), his best friends: Ben Starling (Austin Abrams) and Marcus “Radar” Lincoln (Justice Smith), and his childhood crush Margot Roth Spiegelman (Cara Delevingne). “Q” considers his life “flip turned upside down” the minute he meets Margot after she moves across the street from him. Through the period of growing up into present day high school “Q” goes through the experience of becoming friends with Margot and then slowly drifting from her. One night, however, she comes to visit him to ask for assistance in getting revenge on her boyfriend for cheating on her and her boyfriend’s friends for not telling her about it. The two embark on a journey throughout the night that makes for lasting memories in “Q”’s mind. The next couple of days he realizes Margot has not been in school and soon finds out she disappeared/ran away. From there “Q” goes on a journey with Ben and Radar to find Margot using clues she left behind that allude to where she could be. As they progress on this journey “Q” begins to question how much he actually knows about Margot. Supporting characters that join in also are Lacey (Halston Sage), Margot’s best friend, and Angela (Jaz Sinclair), Radar’s girlfriend.

Paper Towns’s focus falls upon the relationship between “Q” and Margot, but does so from an interesting vantage point. Margot’s physical presence isn’t huge in this movie, but her character is developed through what “Q” sees and thinks of her. Minus a large part of the opening part of the movie Margot is absent mostly. The rest of the movie focuses on “Q” going on this physical, emotional, and mental journey of finding where Margot is and who she is as a person with the help of his two best friends, Ben and Radar, Margot’s best friend, Lacey, and Radar’s girlfriend Angela. Nat Wolff does a decent job of portraying “Q”. He plays the awkward teenage guy who has various periods of fixation with Margot as a crush while still showing a clear dynamic of who he is amongst his best friends. It’s not done on the highest or most dramatic level, but the movie’s plot shows “Q” going through a test of sorts of what matters to him most in his current phase in life is when his crush on Margot is somewhat pitted against the established relationships he has with his best friends. This is mainly shown when they all go on their search for Margot and later on in the journey “Q” comes to a crossroads and has to decide if searching for Margot is worth it because of the feelings he has for her. As for Margot, her being absent for most of the movie has some benefit due to the fact that the actress who plays her, Cara Delevigne, is making her acting debut through this movie. As an actress it’s hard to gauge Cara’s skill since she doesn’t have a lot on her acting resume, but for the most part she seems to hold her ground and carries each scene she’s in well enough. The chemistry isn’t always the best between her and Nat Wolff as there are scenes where the conversation feels forced and disjointed, but it’s on par enough for one to understand what is going on. For the most part her character is portrayed as this mystery who has these unbelievable life experiences that one can only dream of having. Part of the story is for “Q” to find out whether they are to be believed or not. 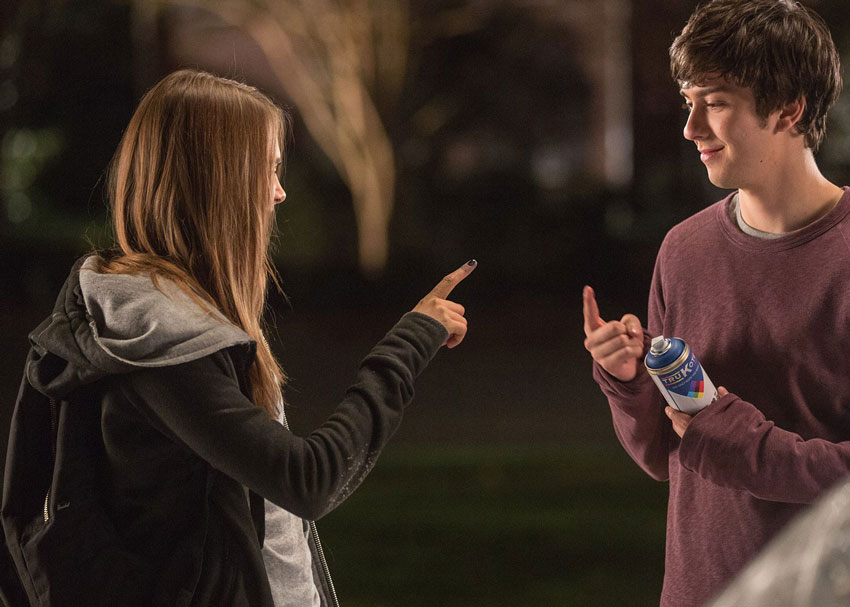 The Fault In This Film

For the genre Paper Towns falls in, this movie doesn’t really present anything that its audience could consider groundbreaking for a coming-of-age drama, but as mentioned before it’s enjoyable on an average level that the audience won’t really have much to complain about. If you’re looking for a drama that’s going to blow your mind away though, then maybe Paper Towns may leave you feeling unsatisfied and unfulfilled. One thing to note is that unlike The Fault in Our Stars, John Green’s other novel brought to the big screen, this movie does focus more on the relationship between best friends than it does on romantic interests. There is a partial element of romance though that is essential to the plot, but that isn’t necessarily the biggest thing to take a away from this movie. That could be a good thing for some audiences as there are already a lot romantic dramas that have been released and not many of them have been done very well. 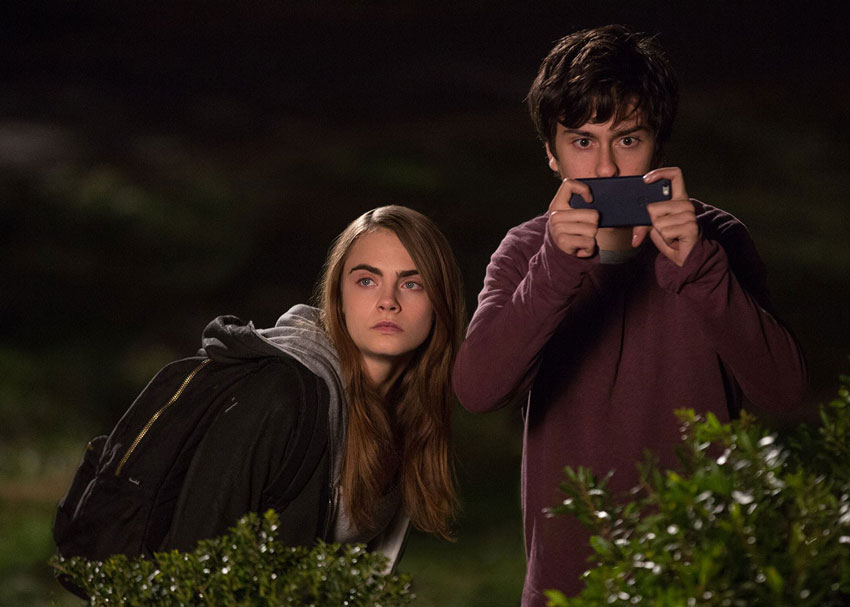 I Spy the stars of Papertowns. Image provided by 20th Century Fox.

Given that this movie is about the relationship between best friends let’s evaluate how the supporting cast helps to hold this movie up. Out of the three in this group of best friends, Ben is the one who acts like a player even though he has no game. He’s the guy in this group of friends that tries too hard to find a girl he likes and it ends up with him falling on his face quite a bit. Radar on the other hand is the one in the group who has a relationship and is happy with how it is, yet he is embarrassed to allow his girlfriend, Angela, to meet his friends and his family for reasons you will find out early on. Lacey isn’t delved into a lot as a character and stands mainly to have her relationship with Margot contrast “Q”’s supposed relationship with Margot. It’s interesting to see, but walking away once the movie is done you don’t have any great details of who Lacey is other than she’s Margot’s best friend and that she’s a small part of the equation to why Margot runs away. Along with that there is a small identity issue to be somewhat explored with Lacey at one point, even though there’s no real gravity to make the situation matter to the audience on a level of high importance. As for Angela, she’s the character that comes in late to the party, or story in this case, and besides being Radar’s girlfriend her character isn’t really explored that much further. She’s there to be another person to go on this journey with the established gang and to make conversation with.

While this movie isn’t perfect it’s still one you can enjoy and take a simple life lesson from. Not every movie can be as complicated or mind blowing as Inception while still being fun and enjoyable. Time to time it’s nice to have a simple drama such as Paper Towns that allows you to walk away with a feel good vibe. Well I hope you can walk away with a feel good vibe and if not then at least you know now how the movie was. Give Paper Towns a chance and let it take you on a quick journey of what high school or your last year of high school may possibly be like. Let it give you the chance to see what is important to take away from life while you’re young and what you can let go of.

While this movie isn’t perfect it’s still one you can enjoy and take a simple life lesson from. Not every movie can be as complicated or mind blowing as Inception while still being fun and enjoyable. Time to time it’s nice to have a simple drama such as Paper Towns that allows you to walk away with a feel good vibe.