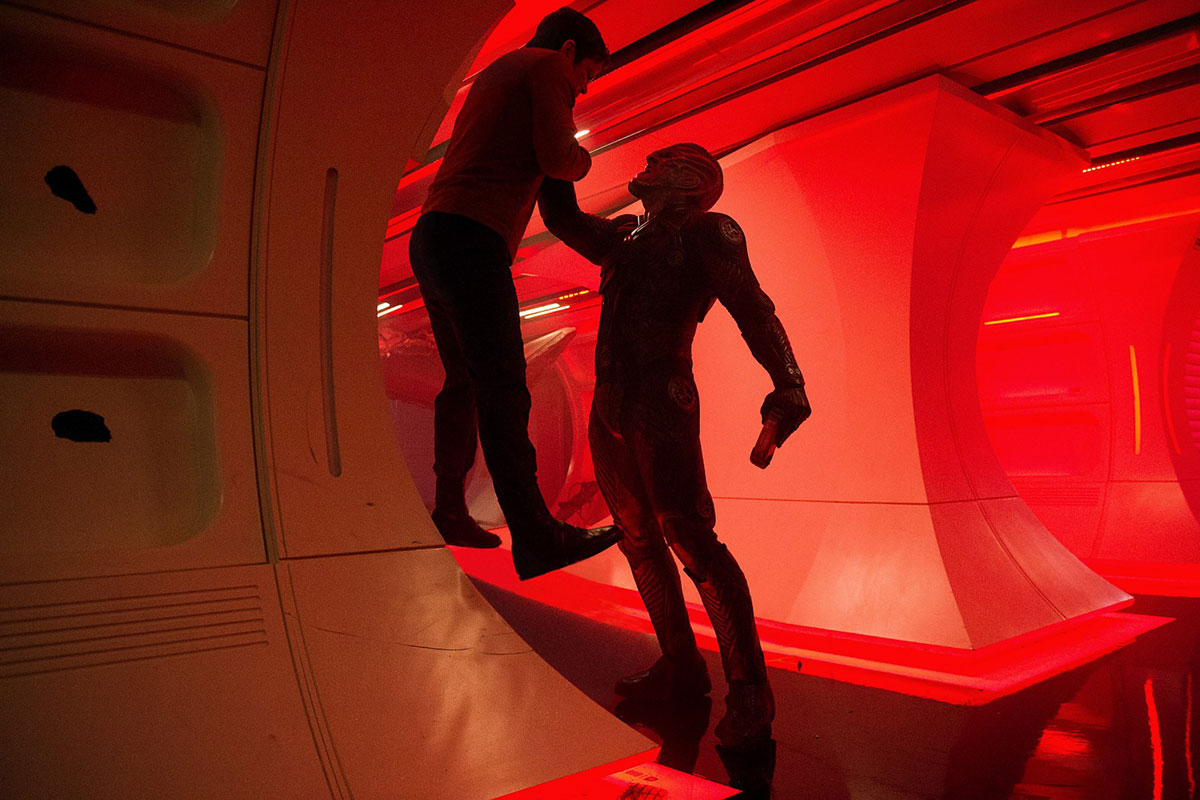 A Bit Episodic - Star Trek Beyond

Star Trek Beyond succeeds in bringing the franchise much closer to its television counterpart. There is a good balance of action, story and great performances. Sadly, it doesn't quite hit the high notes.

Star Trek Beyond is the third entry in J.J. Abrams’ rebooted Star Trek Universe. It is directed by Fast & Furious director, Justin Lin, and is penned by Simon Pegg. The film opens with an exhausted Enterprise crew three years into a deep space mission. Captain Kirk (Chris Pine) echoes the state of the crew as he contemplates retiring from Star Fleet and giving command to Spock. Spock (Zachary Quinto) is also having second thoughts about continuing to serve in Star Fleet when personal issues start to crop up in his life.

The meditative state doesn’t last long. Before you know it, the Enterprise is battling for its life in an ambush near an abandoned planet. With a scattered crew, no ship, and a new enemy in pursuit, Kirk and the survivors must find out who is behind the attack and how they can escape.

Star Trek Beyond benefits from being the closest in spirit to the original series. While I believe the original reboot offered the most character development, Beyond really stepped it up from the mostly action-packed Into Darkness. Although I enjoyed Into Darkness, it is admittedly the darkest of the films which is probably due to the effect Christopher Nolan’s Dark Knight has had on subsequent films. 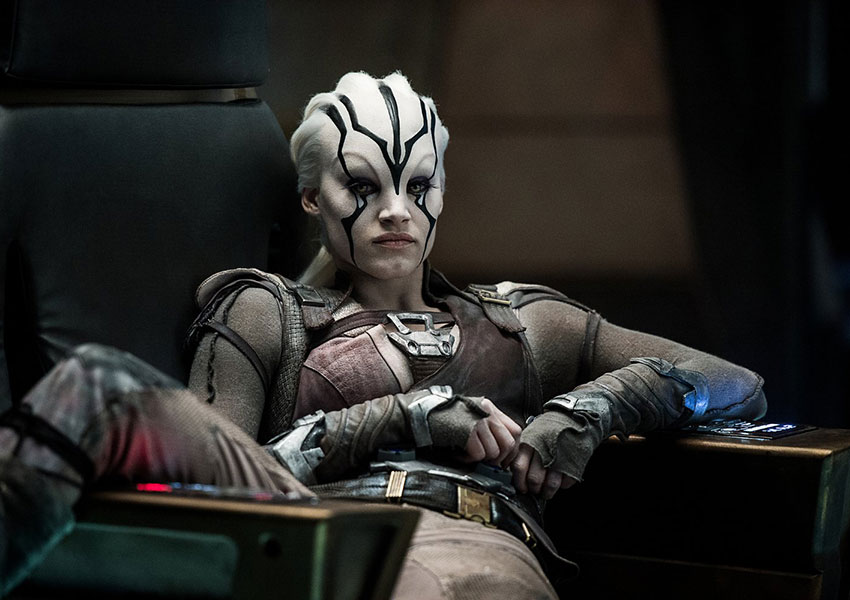 Jaylah is a great addition to the Star Trek Universe.

Beyond is much lighter in tone, focusing on relationships between crew members and throwing in a few quips. Though the jokes don’t always land, it is refreshing to see a crew that is more hopeful even in a desperate situation. The relationships that are highlighted most are between Spock and Bones, and Scottie and franchise newcomer, Jaylah. Jaylah (Sofia Boutella) provided a strong addition to the crew we have come to recognize. Sofia balances the alien character with warrior-like ferocity and campy humor. Her back and forth with Scottie (Simon Pegg) is fun and its great seeing Scottie get some more screen time.

Spock and Bones (Karl Urban) don’t really share much screen time together in previous films so seeing them banter felt right. Similar to Spock’s relationship with Kirk, Bones tries to get a rise out of Spock to hilarious effect. One aspect that was sorely missed is Spock and Kirk’s banter. They are rarely seen together and it is extremely noticeable.

And What Of The Big Bad?

Villainous alien, Krall (Idris Elba), is a dominate presence on screen and a worthy opponent for the Enterprise. The introduction to Krall is a highlight in the film although his character does too much standing around throughout the majority of the runtime. It isn’t until you reach the end that you understand Krall’s motivations. Even in the reveal, the character arc falls flat with some odd choices from the director and writers. I still prefer Benedict Cumberbatch’s performance as Kahn. 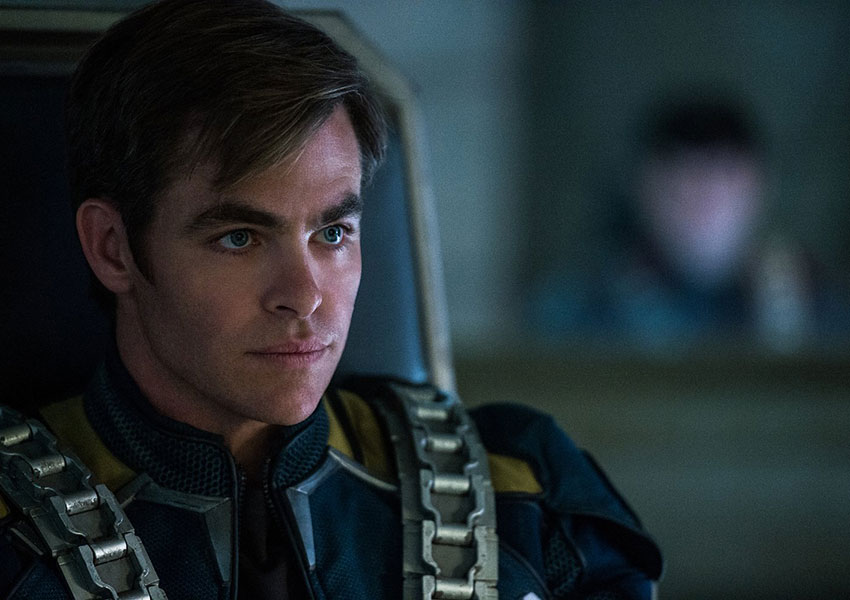 Captain Kirk has his work cut out for him…

Lin Us A Hand

With J. J. Abrams taking on Star Wars, directorial duties were turned over to Fast & Furious director, Justin Lin. Seeing him as an action director, I never really felt like he was a good fit. Justin Lin’s directorial decisions puzzled me. Sometimes, the film looks spectacular. Other times, it recalls my memories of being trapped in a rusty carnival ride. A little too much tilt and spinning on this Star Trek ride. Also, there is one scene that takes place at night and it is extremely difficult to make out anything that happens. Normally I wouldn’t mind, but the scene features important information pertinent to the rest of the story. Wouldn’t it be nice if we new what was happening?

Must Have Never Happened?

Another issue involves the lack a connective tissue between Beyond and its predecessors. Where is Carol Marcus; who in Into Darkness, was poised to join the Enterprise? How does Kirk cope with dying and coming back to life? Were there any ramifications for the destruction caused by Kahn?

Whether intentional or not, the film distances itself from the last two movies in the franchise. Even Star Wars: The Force Awakens had a few lines tying it to the Prequels that everyone apparently hates (ie. Kylo Ren mentioning the Clone Army). Star Trek had a chance to really build on what has happened, but instead chooses to treat the events of previous films as if they never existed. Star Trek Beyond really did feel, to quote Kirk, “episodic”.

One of the biggest complaints revolved around the marketing campaign for the film. It was extremely underwhelming and relied heavily on action sequences to get audiences to buy in. Star Trek is the opposite, focusing more on storytelling and characters than explosions. Thankfully the actual film attempted to place the story in the spotlight. You’ll be relieved to know that the Beastie Boys song featured heavily in the trailer is actually very enjoyable, if you can swallow how Hollywood it is. Unfortunately, a few lapses in logic and chance encounters prevent Star Trek Beyond from being as strong as it potentially can be.

To Familiar And Beyond!

Star Trek Beyond succeeds in bringing the franchise much closer to its television counterpart. There is a good balance of action, story and great performances. Sadly, it doesn’t quite hit the high notes. Justin Lin fails to capture the magic of Star Trek to the capacity that J.J. Abrams has. The film attempts to flesh out characters, but does so unevenly. An underwhelming story and underutilized villain really hurt its chances at being a decent film. If I recall, the Enterprise has been destroyed in all three films to some extent. Why is this still a major plot point? Kirk’s exhaustion really resonates with me and is a telling sign of where the franchise is. Unlike Kirk, I’m not sure I can stomach another three year journey until the next installment.

But hey! They get Chris Hemsworth back for the next film, so why not?…