“There are two wolves who are always fighting. One is darkness and despair. The other is light and hope. The question is…which wolf wins?”

Have you noticed that many recent films about the future have been so glum? It seems like when tragedy strikes it is impossible to reverse the effects. We are constantly introduced to characters that have given up on any solution to the problem other than fighting until their last breath. Of course, I love those films. I love a group of gritty men and women who fight hopelessly to their last breath. However, this mentality holds a sway on most of Hollywood’s films and it seems to echo in the hearts of those of us alive today. Hearts without hope. Let’s be real…looking around these days, it all seems pretty hopeless. Thankfully, not everyone thinks so. Tomorrowland, directed by Oscar-winner Brad Bird, is a breath of fresh air, challenging the discouraged to think bigger, bolder, and better. 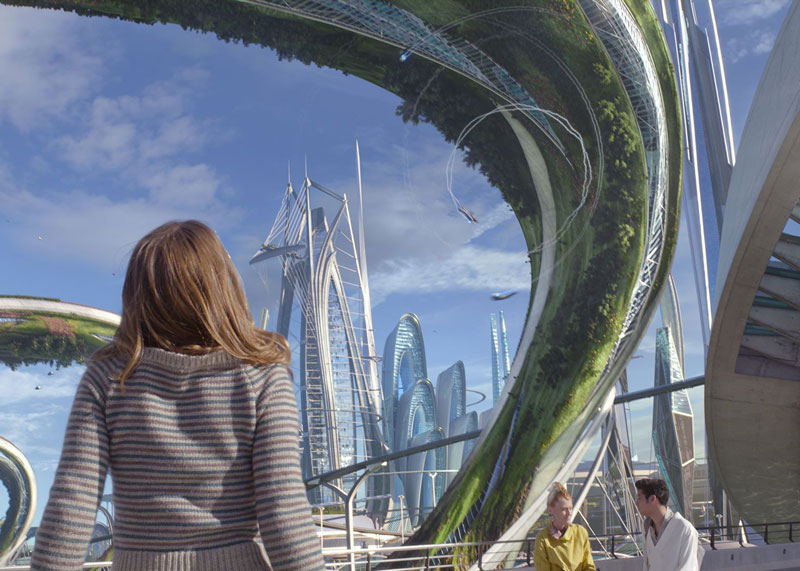 Directly inspired by Walt Disney, Tomorrowland envisions a bright future fueled by technology that aids mankind toward progress and improvement. Jetpacks careen along clear bright skies. Crystal perfect structures tower high around pedestrians. The city is alive and gleeful. This is the magical world of Tomorrowland, built by the most intelligent men and women of Earth in a secret dimension to avoid the corruption of greed and politics. That is, until a young Frank Walker discovers an entrance to this bright future within the tunnels of a Disney park ride and allows us a first glimpse.

As a small boy, he confidently submits his homemade jetpack into the 1964 World Fair. He shines with hope of an inspired future only to be shot down by David Nix (Hugh Laurie), a scientist with a realist mentality. Nix doesn’t have time for dreamers or wishful thinking, only the hard evidence research can provide. Frank is not easily downcast though, and receives some encouragement from Athena, a young girl that leads Frank to Tomorrowland.

Fast forward to present day where we are introduced to Casey (Britt Robertson), a teenager who shares the optimistic outlook of Athena and young Frank Walker. She spends late nights vandalizing a NASA launch station in hopes of preventing it from being torn apart and helping her NASA engineer father from losing his job. During one of these nightly escapades, she gets arrested and makes bail. While she collects her possessions, she discovers an unfamiliar pin that allows her to see Tomorrowland. Fascinated by this new development, Casey stops at nothing to find answers about this strange new place. Her digging leads her to a much older and pessimistic Frank Walker, a far cry from his once youthful and optimistic self. Frank informs Casey of the impending doom of the world and together,  with the help of an unlikely ally, they set on a quest to reach Tomorrowland and try to alter the future.

At first glance, Tomorrowland may seem like one giant feature-length advertisement for Disney parks…and that is probably true. The film is flawed in many aspects but it does present us with some thought provoking questions. It may come off a little preachy, but if you don’t mind, this film shares about our current predicament and offers a much brighter outlook on the future. We don’t have to settle and allow the world to rot. We can be the change that is necessary to create a better future for the next generation. Tomorrowland offers children and adults a choice to dream and hope. 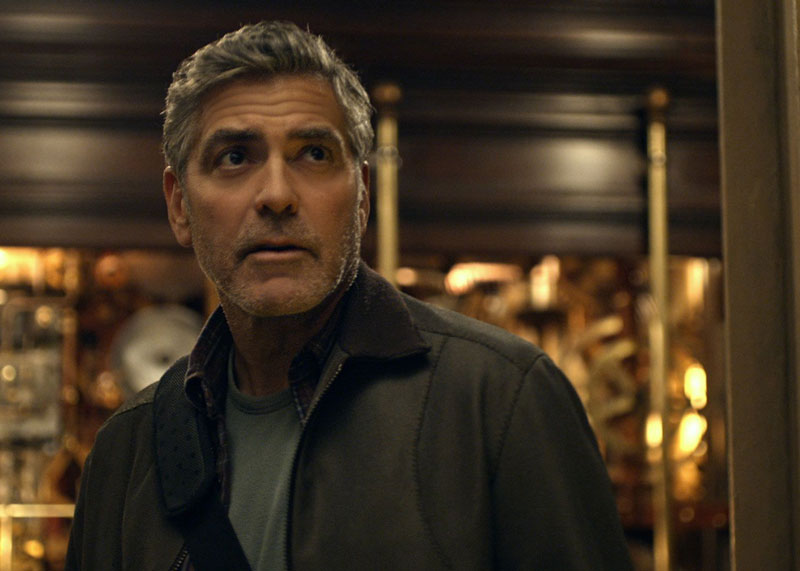 George Clooney plays the crass and bitter Frank Walker very well. You really get a sense of the disappointment and anguish this man has had to live with all those years. Hugh Laurie invigorates the role of David Nix and together those two men carry the film. Britt Robertson’s role as Casey is similar to that of Jennifer Lawrence in her mannerisms and shrilling screams. She does her part fairly well alongside child actress Raffey Cassidy, who plays the young Athena. The two offer a glimpse at the world through eyes that are unpolluted by time and doubt. They also provide most of the film’s humor and antics.

Tomorrowland is very similar to Frank Walker’s jetpack. It may be flawed and expected, but it certainly does try to dream big.  It may not have the most captivating story, some of it being quite obvious, but Tomorrowland is a heart-warming adventure that can inspire and capture the imagination of the next generation of dreamers. It reminds all of us that between the two wolves, the one who wins is the one that we feed.

“There are two wolves who are always fighting. One is darkness and despair. The other is light and hope. The question is...which wolf wins?” Be Hopeful Have you noticed that many recent films about the future have been so glum? It seems like when tragedy strikes it is impossible to&hellip;
Tomorrowland Review
Tomorrowland Review
Brian Maya

Tomorrowland is very similar to Frank Walker’s jetpack. It may be flawed and expected, but it certainly does try to dream big.