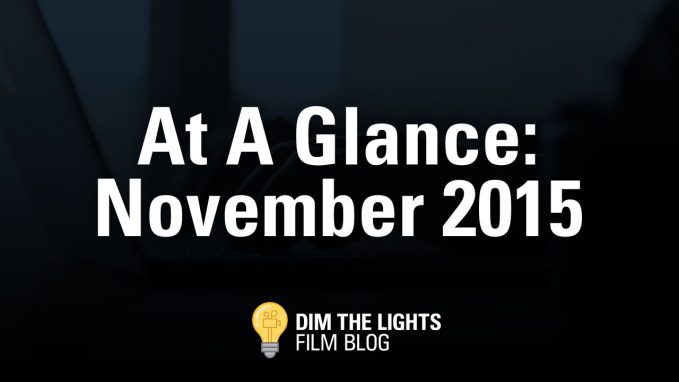 I can’t believe it’s already November! The leaves have changed, football is halfway through the season,  and Fall television is in full swing. November is bringing us some potentially great films including the latest James Bond and some Oscar-bait. Here is what you can expect this month.

The 4th 007 film starring Daniel Craig has some pretty big shoes to fill after the absolutely amazing Skyfall. The film centers on Bond chasing down ghosts from his past and discovering a sinister organization called Spectre, a group familiar to long-time fans of the Franchise. Spectre will bring back key members of the last film, Ralph Fiennes as “M”, Naomie Harris as Miss Moneypenny and Ben Wishaw as “Q”. “Q” and Moneypenny were two of my favorite characters in Skyfall and have such a dynamic relationship with James Bond. I look forward to seeing more screen time of both actors. This will also be the first time we will see the new “M”, who has taken over the role from Judi Dench. Along with returning faces are some new ones. Monica Bellucci and Lea Seydoux will fall victim to Bond’s charm as the latest Bond girls. The role of Bond Henchman has been revived with Dave Bautista playing Hinx. Hinx will have some connection to the leader behind Spectre, played by Christoph Waltz, who happens to be one of my favorite actors and is sure to be an excellent Bond villain. Spectre may potentially conclude Daniel Craig’s run as the British spy. (Idris Elba to fill the role anyone?) Definitely check this one out and read our reviews for Daniel Craig’s previous adventures.

One of my fondest memories of the Peanuts gang was watching the Charlie Brown Christmas special. When I learned they would be creating a brand new animated film I was overjoyed. This film is sure to delight long time fans of the cartoon as well as new comers. The animation fully reimagines and captures the simplicity of the cartoon giving the film its own style and tone. Sure to be filled with laughs and heart, The Peanuts Movie is a must see.

Threatened by the dangers of Communism’s influence, the American government blacklisted 300 people from working in television and Hollywood. Dalton Trumbo was one of the Hollywood screenwriters affected by this crusade to remove any Communist from the country. Despite being banned, Trumbo went on to win Oscars for famous films such as Roman Holiday. Trumbo has plenty of reasons to give this film a try. Firstly, Bryan Cranston looks to put out a stellar performance as Dalton Trumbo. He is surrounded by a great cast including Diane Lane, Louis C.K., and  John Goodman. Trumbo looks to be witty and upbeat following Trumbo’s stand within the film industry.

The conclusion to the popular Hunger Games series will be released this month, featuring the return of Katniss Everdeen and her rebellion as they strike the heart of the Capitol. I was not impressed with the last film at all…which you can learn why here. Despite its shortcomings, I am excited to see Katniss and President Snow clash in the very last Hunger Games. Its been wildly fun ride in a world saturated with book to film adaptations. The Hunger Games series is definitely one of the better ones. Turn your eyes…to the movie screen.

Legend tells the true story of two of the most infamous gangsters in Britain’s history who take the streets by storm. Not only are these men dangerous criminals, but they are identical twins, Reggie and Ronnie Kray. This 1960s crime thriller features a double performance by none other than Tom Hardy. This man…has been on a roll. He is a versatile actor who never falls flat. His last film, Mad Max: Fury Road, also captures the raw talent that Tom Hardy brings to the screen. Read how much we adored that film here.  Anticipate a rousing performance from Tom as well as lots of great laughs, action, and thrills.

Are you excited about any films in our list? Maybe we missed one you preferred? Let us know in the comments below!

Avengers: Age of Ultron ReviewBond In Review: Quantum of Solace