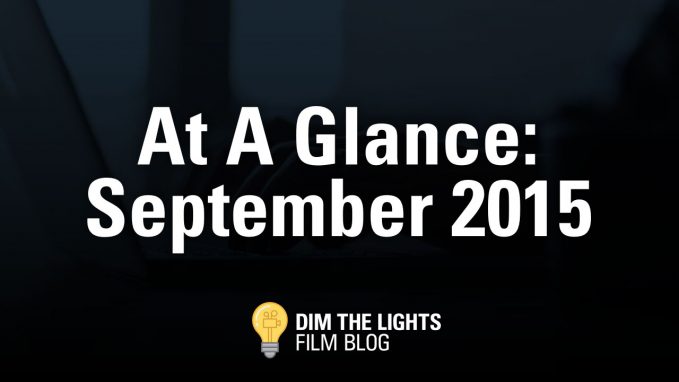 What are we looking forward to seeing this September? Check out our picks for this month’s must watch films.

The Transporter films were always a treat for me growing up. Jason Stratham made a great lead in the action-heavy thrill ride. Now that Jay Jay has gone to bigger and better franchises (cough cough, Fast & Furious), the series has decided on a reboot (shocker) in order to refuel their bank accounts. The latest film is due out with Ed Skrein leading. Ed is receiving some notable buzz surrounding his role as the villain in the high anticipated Deadpool film. Don’t hold your breath for The Transporter: Refueled, because it seems Ed is the only good thing going for it. The film is being produced by the same people involved in the Taken Trilogy. We will see if the film follows the success of the first Taken, or falls as the fodder that was Taken 3 which you can see our review for here. Hoping for the best!

Two strangers find each other in the middle of a cold New York City night and embark on an adventure that challenges them to confront their fears. In Chris Evans’ directorial debut, we find the extremely likable leading man alongside Alice Eve. Chris Evans has been a personal favorite of mine in recent years with films like Captain America: The Winter Solider and Snow Piercer. He continues to charm in this romantic drama, which is sure to pull on some heart strings.

Sleeping With Other People

Following the formula of Friends With Benefits and No Strings Attached comes a new film about trying to keep a sexual relationship minus the commitment. We all know its not gonna work, it never does. The plot is a bit stale, but this film has some redeeming qualities…two actually: Alison Brie and Jason Sudeikis. These two strong comedic leads have some great chemistry and the films hints at a story with some heart. If you don’t mind being inundated in sexual comedy, this one is definitely worth a watch.

This thrilling adventure follows a climbing expedition conquering the monstrous Mount Everest. Getting up seems to be a simple task, but judging by the ominous Inception-like score and the devastating storm approaching, getting down won’t be so fun. The cast is absolutely glowing (Jake Gyllenhaal, Keira Knightley, Josh Brolin, Sam Worthington, Jason Clark and much more), the music engaging, and the scale massive. Jake Gyllenhaal has been fantastic in recent years, evident in his 2014 film Nightcrawler which we reviewed last year. We last saw Jason Clark as one of the better parts in Terminator: Genisys. For a slow month, this is a definite must.

Last year Allan and I got to see the first Maze Runner film, which was pretty mediocre in a industry saturated in film adaptations of popular books. The sequel seems to have stepped up its game, atleast in the trailer. The film picks up where the first film left off, the survivors being taken in by an unknown group. Thomas and the other survivors discover they were not the only group of Maze Runners to survive. The survivors band together to discover there are even more secrets being hidden from them. They must endure a new set of obstacles and enemies in order to ensure their survival in a desolate landscape.

Presenting the true story of Whitey Bulger, the most infamous violent criminal in the history of South Boston. Whitey assists the FBI in taking down the Mafia in exchange for his own turf. Whitey is one of Johnny Depp’s more menacing portrayals, and is sure to be a treat. Whitey’s brother is a U.S. Senator played by the astounding Benedict Cumberbatch. This film looks and feels gritty and intense. We are absolutely excited about this crime drama.

After the disappointing sequel, The Amazing Spiderman, it’s great to see Andrew Garfield back on his feet. I personally really enjoyed the last Spiderman film, even though it had its flaws. Garfield was one of the strengths in that film and his talents carry over to his latest film. 99 Homes tells the story of a father struggling to recover the home his family was evicted from by working for the real estate broker, played by Michael Shannon. Problem is, this real estate broker is the man who evicted his family and that starts a shaky and intensely frustrating relationship. The two leads shine in a film that hints at some thought provoking social commentary about the American dream, and the unjust treatment of our struggling middle class. Eat it Trump!

Are you excited about any films in our list? Maybe we missed one you preferred? Let us know in the comments below!