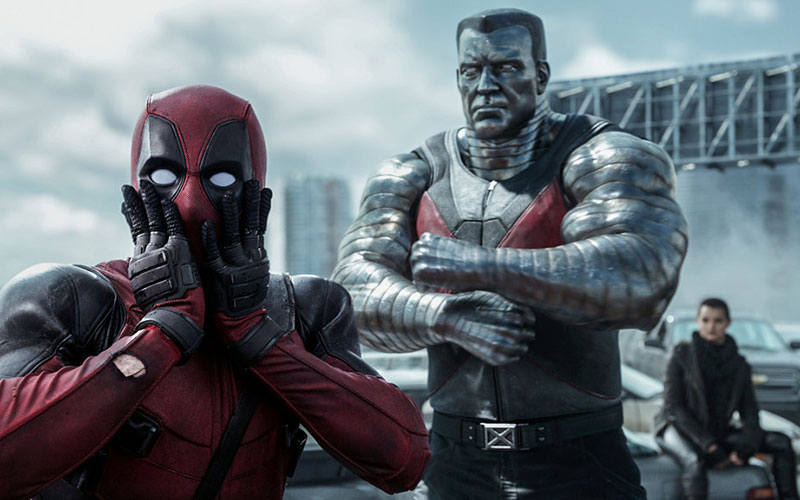 Deadpool Movie For The Win

It has been almost a month since the Deadpool movie cut into theater’s during Valentine’s Day weekend. As of this writing, the Merc with a Mouth nearly doubled it’s estimated film budget shocking hardcore comic fans and casual fans alike. Ryan Reynolds absolutely killed it, quite literally. The film was gritty, violent, sexy, and above all flat out hilarious!

There are plenty more comic book films to look forward to this year, including Batman v. Superman, Captain America: Civil War and Suicide Squad, but the Deadpool movie really outdid itself. That is why I wanted to highlight my favorite moments from the Deadpool movie.

If you haven’t seen the film, please do yourself a favor. Buy a ticket. Buy a chimichanga. Watch Deadpool make your eyeballs melt. Trust me you won’t regret it. Every thing below is spoiler territory. YOU HAVE BEEN WARNED!

Much like it’s successful marketing campaign, the film hits the ground running with an absolute hysterical opening. Designed to mimic other super hero film opening or closing credits, the Deadpool movie starts with a slow motion still of a fiery vehicle. The camera pans to reveal Deadpool entangled with multiple henchmen inside the vehicle as it tumbles slowly on a crumbling highway. What follows are not your typical cast credits.

According to the film, it was directed by “some douchbag” and stars “God’s Perfect Idiot” (Ryan Reynolds) and that the writers were the “Real Heroes”.

This opening really set the tone for the film and had the whole theater in a giggly uproar. 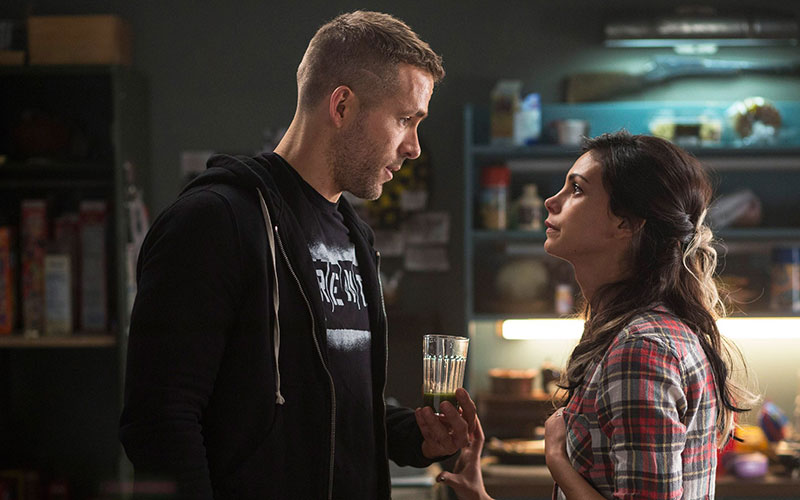 Wade and Vanessa share a touching scene after he learns about his cancer.

The writer’s made a great call when they decided to tell Deadpool’s origin story in a non-linear fashion. Let’s be honest, origin stories are so 2002. We are in the Golden Age of comic book movies and we are all about the team-ups. We want to see our heroes (and villains) interact and cross over in large scale over arching stories. Deadpool successfully avoids the traditional super hero origin story by starting the film with Deadpool as the lethal Merc with a Mouth. Our anti-hero then proceeds to explain his current situation through flashbacks.

Aside from a few necessary alterations to the origin, Deadpool’s story stays intact. You really feel sorry for the mercenary when he discovers true love and immediately realizes he will die of cancer. Amidst all the laughs, Deadpool really had heart. In my opinion that is really what won over audiences around the world. You know aside from the sex jokes, and the hacking and slashing.

One particularly stunning scene was Wade Wilson’s transformation into the Deadpool we all know and grimace at the sight of. He is one ugly dude. It explains why he is so pissed off at Francis (a.k.a. AJAX), the man responsible for promising Wade life, and turning him into well…Deadpool. 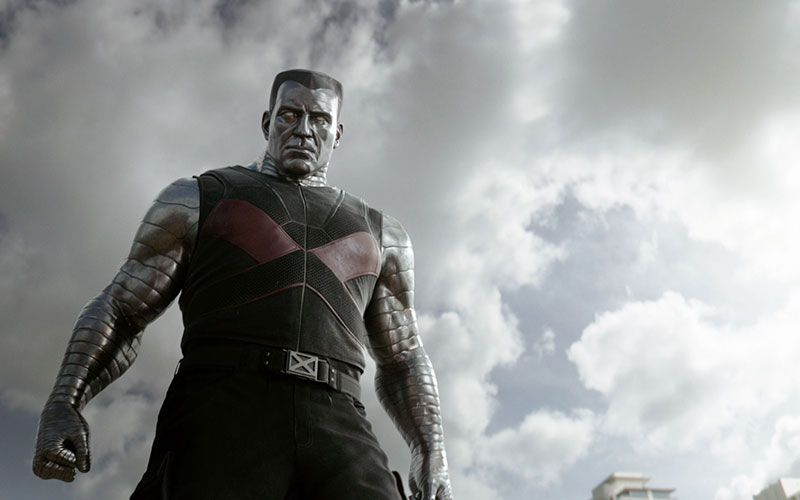 Near the middle of the film, Deadpool’s anti-heroic antics land him in the cross hairs of X-Men Colossus and Negasonic Teenage Warhead (yeah, probably the sickest super hero name ever.) They confront him as he pursues Francis on a busy highway in the middle of rush hour.

First off, let’s acknowledge the awesomeness that is Colossus. You may not recognize him from previous X-Men films. Mostly because he is played by a different actor and also this is the REAL Colossus. As he is portrayed in the comics. The kind, sensitive, not-violent-unless-needed Colossus who teaches at Xavier’s School For Gifted Youngsters.

Colossus tries to gently persuade Deadpool to stop his hunt and join the X-Men. Deadpool’s unsurprising response is a giant middle finger as he tries to subdue Colossus. Let’s just say it doesn’t pan out for Deadpool. He strikes Colossus impenetrable exterior breaking each of his limbs and resembling a drunken T-Rex. It is almost a wink at a famous scene in Monty Python And The Holy Grail (“It’s just a flesh wound”).

Colossus hang cuffs the stunned assassin and drags him away. This only last for a moment since Deadpool uses a knife to 127 Hours his hand off (SPOILERS). Bloody and hilarious. 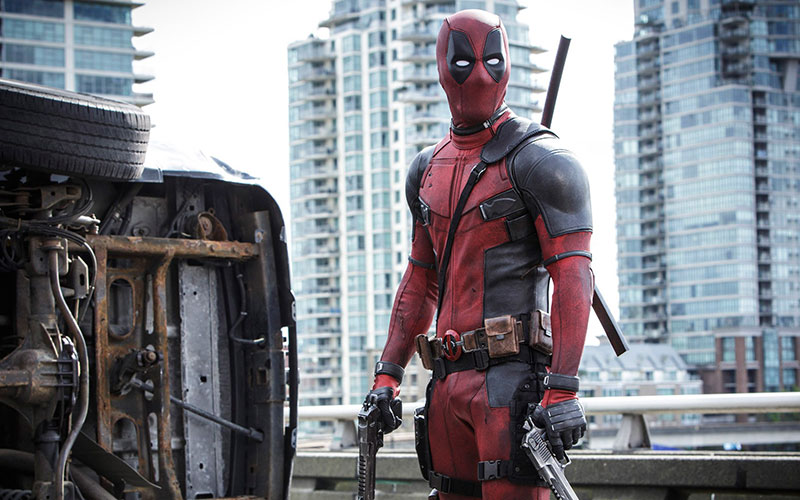 Deadpool hunts for Francis on a busy highway.

Deadpool’s mad hunt for Francis was probably one of the funniest parts in the entire film. He takes down each of Francis’ known contacts in the best and most violent of ways. One of the best parts in the montage shows a bloody man dragging his half-beaten body across an ice rink as Deadpool threatens to crush him with a Zamboni. He’ll probably die…in about 5 minutes.

In the beginning of the Deadpool movie, Wade hails a taxi and gets familiar with Indian driver Dopinder’s story. Dopinder seems to enjoy Deadpool’s company and proceeds to express his woes involving a girl he liked and his romantic rival. Deadpool advises Dopinder to take what belongs to him by force and quit playing nice.

Toward the end of the film, Deadpool, along with Colossus and Negasonic, runs into Dopinder again where he learns the timid taxi driver took Deadpool’s advise. His romantic rival was tied up in the back of the taxi. His woman successfully obtained.

Colossus looks at Deadpool disapprovingly and Deadpool tries to correct his poor advise. Except, Deadpool whispers how proud he is of Dopinder’s actions.

This was a great arc that paid off in big laughs by the end of the film.

Deadpool was such a breath of fresh air in a comic book movie saturated world. Definitely worth multiple views. Check out Episode 1 of the Dim The Lights Podcast for an in-depth discussion on Deadpool.