Home » The Spectrum » Opinions » Was Iron Fist Miscast? Here Are 5 Reasons Why That’s Not The Case.

Was Iron Fist Miscast? Here Are 5 Reasons Why That’s Not The Case. 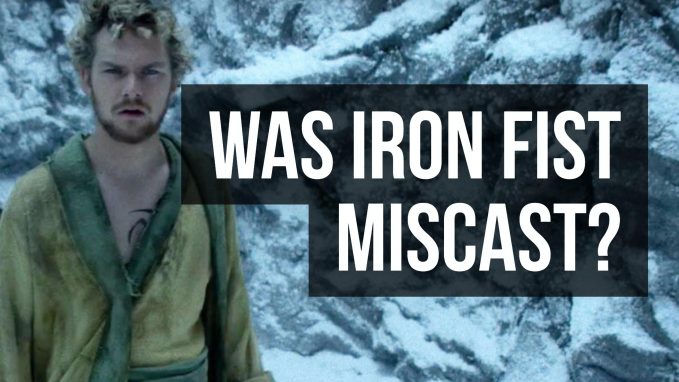 So I’m about half-way through the newly released Netflix Original series Iron Fist and I’ve been meaning to share my thoughts on the apparent miscasting of the lead hero, Danny Rand. With early reviews of the new Netflix series being very unkind, it seems the blame game is spreading rapidly. One of the primary reasons is the controversy surrounding the casting of Finn Jones as Iron Fist.

Marvel has been criticized for its casting of a white man becoming the greatest champion of martial arts and previously faced pressure to cast an Asian-American actor as the Iron First. Actor Finn Jones shared his frustration with the criticism of the show during an interview with Vulture stating,

“There’s so much outrage in the internet these days, right? Why don’t people just — look, the issue is that people are judging before they’ve even seen the show. And that’s problematic. C’mon. Don’t get angry and start a mob when you don’t even — you haven’t even seen the show! You don’t even know what we’re doing with it. It’s unjust. It’s unfair. ”

Frankly, I share Finn’s frustration. It really is unfair. There really is no winning in the media. Both Marvel and Netflix are two of the leading media giants currently absorbing a majority of our television time. Despite their best efforts to gives us diversity in casting, it seems fans and critics agree that Marvel and Netflix dropped the ball.

I believe the backlash is greatly influenced by the negative reception of the Iron Fist series and is a way for people to push blame on the show’s shortcomings. Even though I’m only halfway through the show, I’ve really enjoyed Iron Fist. That doesn’t mean the show is flawless. Iron Fist is riddled with problems that make it less appealing than Marvel’s previous Netflix offerings. Both Daredevil and Luke Cage have been the standouts for me, though they share similar flaws to Iron Fist. Pacing, fight choreography, plot threads, and story are just a few of the major issues holding Iron Fist from guaranteed success. I will be talking more in-depth about my feelings about the show in a separate review once I finish it up.

The backlash to Finn Jones casting is unwarranted. Everyone complaining about representation and diversity should really be looking at the surprise stand-out of the series, Colleen Wing, played by Jessica Henwick. She’s amazing!

As for Finn Jones, I think the issue lies more in the writing than any “miscasting”. Here are 5 reasons that support this opinion:

If you’ve ever picked up an Iron Fist comic book, you’ll notice that under the mask is a very white, very not-Asian young man. Dating back to the very first appearances of the martial arts master, Iron Fist has always been Danny Rand, a New York-born Caucasian man. The fans demanding an Asian-American is contradictory to the source material. It made much more sense for fans to rebuke the casting of Tilda Swinton as the Ancient One in Marvel’s Doctor Strange than for fans to ask for an alternative to Danny. The film Gods of Egypt is another great example of warranted outrage due to “white-washing”. I don’t believe Iron Fist deserved that treatment because the creators were being true to the comic’s history.

One of the main reasons fans preferred an Asian American actor to portray Danny Rand was to avoid the tiresome “White Savior” trope seen in movies. One recent example of this is Matt Damon’s casting in The Great Wall where he plays a Caucasian man who saves an entire nation. While its very easy to say the same of Finn Jones’ Danny Rand, thats not true at all.

Danny Rand in Iron Fist is a deeply flawed human being. The first few scenes we see Danny in depict him as a deeply disturbed individual. He assaults a team of security guards. He breaks into a corporate building. He breaks into a New York City apartment. He even narrowly avoids crashing a car out of frustration. Danny Rand may be the hero of the series, but he is by no means a “savior” figure. As a matter of fact, Danny relies heavily on other characters to help him when he is in a jam. He is seen pleading for help in the first few episodes to a host of characters including badass Colleen Wing, Joy Meachum and Ward Meachum.

Another part of Danny’s character that dispells the “White Savior” trope is his naivete. Danny exudes a childlike approach to solving complex problems. He doesn’t know it all. He doesn’t fix everything. He doesn’t have all the answers. He is very optimistic and perhaps a little too trusting of people around him. It makes sense considering Danny was 12 years old last time he was in the real world. Many of those childlike characteristics stuck with Danny and he is now attempting to overcome them as he journeys into the perils awaiting him.

3. The City Of K’un-Lun Is Diverse

In an attempt to avoid the common tropes of mystical Himalayan monasteries, the creators of the show envisioned an updated version of this important city. K’un-Lun is a city that exists within another dimension and only appears on Earth every ten years. The city got a demographic makeover by diversifying the residents of K’un-Lun. The reasoning behind it? Since K’un-Lun exists in an otherworldly place, there is no need to distinguish it as a Tibetan or Chinese-centric city. Although the portal appears in an Asian country, it doesn’t mean that all the residents are Asian.

I think this was a great compromise that updated the city while maintaining the comic book history of the characters.

I may be 25 years old, but that doesn’t mean I don’t enjoy watching Disney XD animated shows. One that came to mind while writing this was Ultimate Spiderman, where Danny Rand makes frequent appearances. Guess what? He’s white! Even in other forms of entertainment, Danny has appeared just as he did in the comic books. I don’t remember hearing an uproar about those illustrated depictions…hm. The Ultimate Spiderman Wiki page even describes him.

Iron Fist, aka Danny Rand, is a blonde 17-year-old martial artist and has a very muscular build for his age.

For everyone crying about diversity, look no further than Finn Jones’ co-star Jessica Henwick. In my opinion, she is one of the standouts of the series so far. In the first few episodes, you can already tell that Colleen is not the girl to mess with. As a martial arts expert and owner of her own dojo, Colleen is just as lethal as Danny is.

Jones goes a step further: “Danny needs Colleen I think more than Colleen needs Danny,” he says. “Danny is in complete pieces and he needs the strong women around him to kind of hold him up and help him get through this adjustment in his life, this transition of coming from boy to man and taking hold of his responsibility.

While Iron Fist is one of the weakest Netflix/Marvel shows to debut, it has zero to do with the race of the lead character. The creators and cast both agree that they only set out to produce the best show possible and they felt that Finn Jones was the right guy for the job. Despite your personal feelings on the show itself, it needs to be said that not everything has to become a race war. We live in a very divisive time in America. It seems that our political and societal issues are bleeding into our media. While there are definitely some pieces of entertainment that deserve a good smack across the face, Iron Fist is not one of them.

If you haven’t seen the show yet, give it a try and let me know what you think!