Welcome To The Spanish Inquisition

Michael Fassbender plays inmate Cal Lynch. As stated in the trailer by Marion Cotillard’s character, Cal is at death’s door and his only way to live is to comply with the organization Abstergo. The company seeks to uncover the memories of Cal’s ancestor, Aguilar de Nerha, an assassin from the Spanish Inquisition. Abstergo seeks to mine Cal’s buried memories for some greater purpose which has yet to be revealed.

Aside from the odd music choice, I really enjoyed the initial Assassin’s Creed trailer. I’m not a huge fan of inserting rap into a historic period. It feels strange if not in a time where that music already exists. I highly doubt we anything like it during the Spanish Inquisition. The Assassin’s Creed trailer 2 song choice feels much more cohesive with the visuals. It still takes me out of the trailer, though. Be better Fox!

Along with a new trailer Fox also released a awesome new poster: 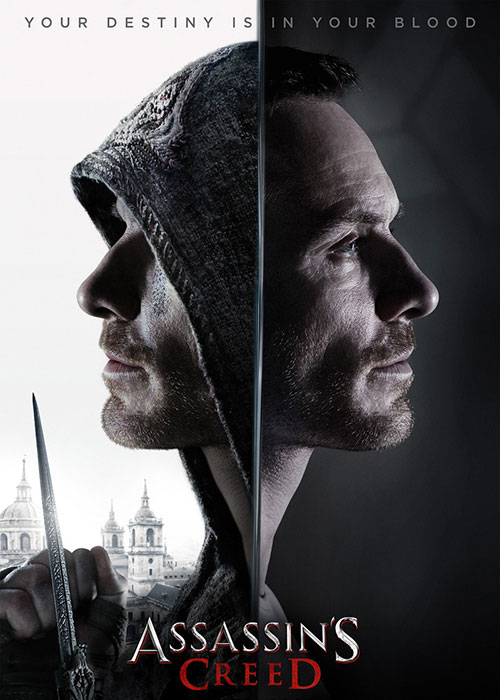 I really have high hopes for this film. We’ve had a long history of disappointing video game adaptions this year (ie. Warcraft and Ratchet & Clank). As an avid gamer, I want these properties to succeed and I think they have a place in Hollywood similar to the popularity of comic adaptations.

The Assassin’s Creed trailer 2 has solidified my belief that we are on the verge of obtaining massive amounts of successful game properties. The trailer gives us a little bit more about the story without spoiling any major plot points.

As a fan of the game series, I think this has a good chance at being critically and commercially successful. The cast is amazing! Academy Award winners Fassbender and Cotillard are among my favorites working today. I think they will bring the star power a series like this needs to succeed. Also, director Justin Kurzel is a successful director who had a large part in the most recent Macbeth remake. If you check out that trailer you can see that the tone is very similar, especially during the Spanish Inquisition segments.

What Do You Think Of Assassin’s Creed Trailer 2

Assassin’s Creed may be the spark that Iron Man was for the MCU. Do you agree? What is your favorite video game adaptation so far? Sound off below!