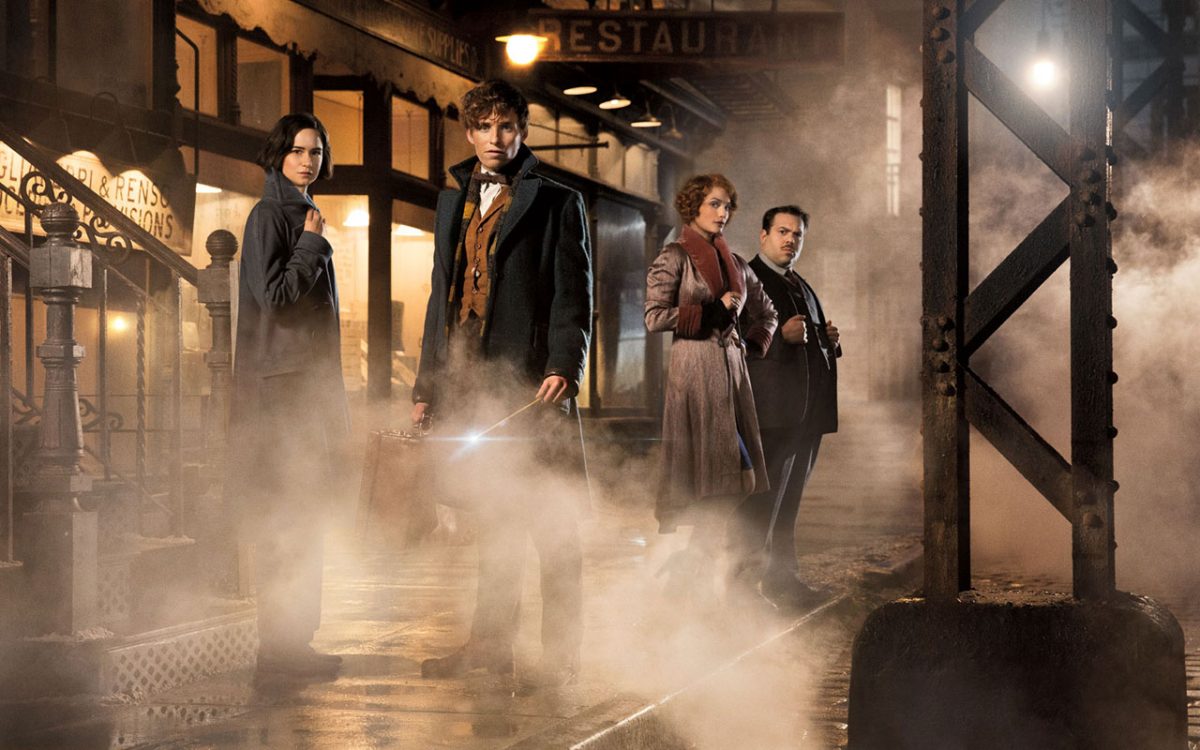 Returning to the Wonderful World of Magic

J.K. Rowling invites you back to the wonderful world of magic she created in the Harry Potter novels! This time, we won’t be going back to Hogwarts. Oh no. We will be introduced to entirely new characters and scenery. The new film coming out, Fantastic Beasts and Where to Find Them is based off the book of the same name, and acts as a spinoff and prequel of the Harry Potter novels and films. I haven’t had the pleasure of reading Fantastic Beasts, which I plan on doing before the film comes out, but I do know it’s one of the textbooks Harry Potter used at Hogwarts. It details and talks about the many magical creatures that exist and the traits they have. The main character of this film will be Newt Scamander (Eddie Redmayne), the author of that book. That name should a ring a bell to Harry Potter fans. While it’s not a name dropped often, Newt Scamander is known for being a famous “magizoologist” (one who studies and researches magical creatures) and, as just mentioned, the author of the novel, Fantastic Beasts and Where to Find Them. It’s in this book that he details everything he’s learned about the magical creatures he’s studied and came across. That makes sense given that’s what he would do in the profession of “magizoology”.

New World, New Characters, and a Taste of Nostalgia

Seeing the Warner Bros. logo transition into the screen Patronus style is a nice way to start off this new trailer. Right off the bat we’re treated more to our main character, Newt, in person and through dialogue, well through Percival Graves narration. Percival Graves (Colin Farrell) is the one who begins this trailer with what seems to be a conversation with Newt about his past. Through Graves we know that Newt was expelled from Hogwarts for endangering witches and wizards. Not only are we told that, but we are told that Albus Dumbledore argued heavily against his expulsion. It would seem Newt has found a friend and possibly a mentor in Dumbledore. Is it too much to hope for a cameo or small appearance by him? We can only wait and see.

Anyhow we see Newt coming into New York, in what is 1926, with his briefcase full of magical creatures. It’s cool to see that enchanted suitcase of his. If only the lock worked better and kept all the creatures from escaping. Alongside to this treat, we’re given glimpses of the magical side of the world that awaits us Harry Potter fans in New York. It’s cool to see all the aesthetics, the established world in this setting, and what looks like duels and apparitions at various points in the film, all of which I’m looking forward to seeing. We get to see all the various characters that will be in this film. Porpentina “Tina” Goldstein (Katherine Waterston) is seen here again and it’s more than evident that she’s Newt’s ally and greatest form of help in this magical PR disaster. Her sister, Queenie (Alison Sudol), is seen as well, enchanting a brick wall that looks to be the entrance to the magical world. The glimpse is quite reminiscent of Harry and Hagrid first stepping foot into Diagon Alley. Along with these characters we see a No-Maj (American term for non-magical folk in the U.S., like what “muggle” is for Britain) named Jacob Kowalski being exposed to magic. He’s definitely in for a surprise when he sees all this. The scene with him and Newt, when Newt goes inside his briefcase is pretty funny. It puts a whole new meaning on “pretending to walk downstairs.” Last but not least, there’s slightly more footage of Graves and one scene where we get our first look at Seraphina Picquery, President of the Magical Congress of the United States of America (MACUSA). The MACUSA is the equivalent of the Ministry of Magic, but in America. She is probably the one to dispatch Graves to deal with Newt and the havoc he caused.

High Hopes to a New Installment, and Trilogy

Fantastic Beasts may not be Harry Potter, but it looks promising and seems to be a welcome addition to J.K. Rowling’s magic universe. At the very least, it’s nice to hear a variation of the Harry Potter theme song in the background toward the end of this new trailer. Fantastic Beasts will make J.K. Rowling’s debut as a screenwriter. This film will also see David Yates return to the director’s chair along with David Heyman returning as a producer. David Yates directed Harry Potter films from Order of the Phoenix till the last Deathly Hallows film. David Heyman has been a producer since Harry Potter’s inception on the big screen. Warner Bros. plans to turn this film into one of a trilogy set of films, so we await to see what this first film has in store for us. Fantastic Beasts and Where to Find Them will be released on November 18, 2016.