Behold, the first ever look at the Guardians of the Galaxy Vol. 2 teaser poster! #GotG #GotGVol2 pic.twitter.com/hroxTDB7To

Similar to Zack Snyder, James Gunn is great at feeding Marvel fans throughout the world little gems of content that really gets everyone excited for Guardians Of The Galaxy Vol. 2.

Guardians Of The Galaxy Teaser

The teaser is fairly short, obviously. It gives us a glimpse of each of the ragtag team including Star Lord (Chris Pratt), Gamora (Zoe Saldana), Drax The Destroyer (Dave Bautista), and Rocket Racoon (voiced by Bradley Cooper). Groot (voiced by Vin Diesel) is sorely missing, but James Gunn did release an image of a smaller and more adorable Groot earlier today. 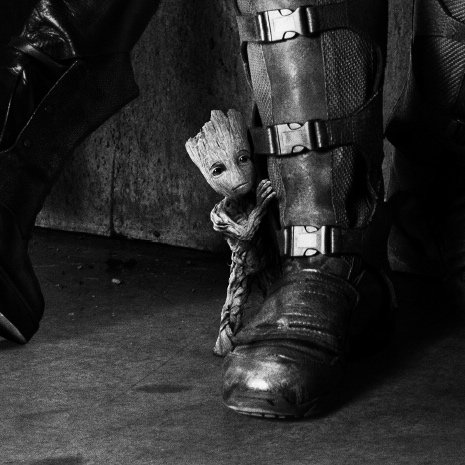 If you saw the original film, you know that one of the villains, Nebula (Karen Gillan) barely escapes a tussle with Gamora. She can be seen in the trailer and in the teaser poster above. Looks like her and another returning character Yondu (Michael Rooker) are joining the team.

While there were many naysayers before the release of the original film, I was one of few who believed in this property. I am so happy it was critically and commercially successful. I have been looking forward to a sequel ever since, so let’s just say I’m elated at the teaser.

The Guardians Of The Galaxy Teaser is everything we could have asked for. We get to see most of the returning cast. We get some epic shots of Gamora, and Star Lord. It also included the trademark Guardians humor with a scene between Drax and Star Lord. Looks like Star Lord still has the “hots” for Gamora, but Drax as a very qualified therapist, tells Star Lord that he needs to find a more pathetic woman.

Can’t wait for the first trailer!

An Old Fashion Standoff: The Magnificent Seven ReviewKeeping Up With The Joneses Review | Dim The Lights Audio Podcast Ep.6